Home Marijuana News Got Cannabis Stuck Up Your Nose? – The Story of Nose Pot is Real

Got Cannabis Stuck Up Your Nose? – The Story of Nose Pot is Real 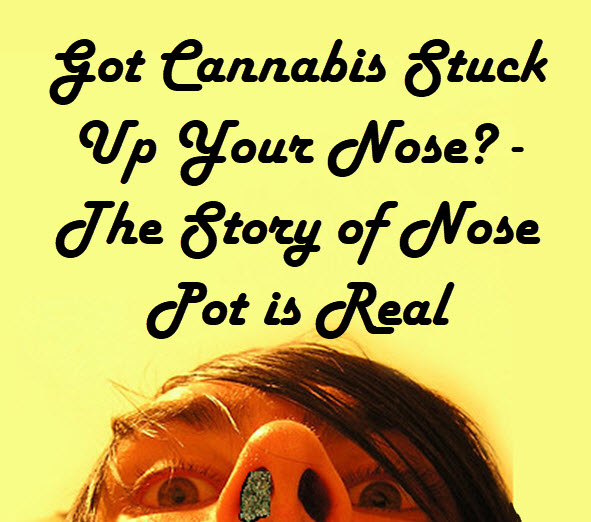 While “nose candy” typically refers to cocaine our story today will attempt to redefine the term. This article is not meant to showcase the latest developments within the cannabis industry, or to illuminate you on new medical benefit discovered by researchers.

Rather, today we aim to merely entertain by exposing this little piece of insanity, that really happened, in this crazy little thing called life. Of course, the only reason this story would be posted on Cannabis.net is because it has “something” to do with cannabis.

In fact, cannabis sits in the center of this story, however it only serves as the object that brought all of the circumstances together. But enough teasing…let’s open our “WTF Vault” and take a deeper look at this story.

It all started 18 years ago…

Eighteen years ago, there was an unnamed man sitting in prison somewhere in Australia. We’ll call him “The Shnoz” for the sake of the story.

One day, “The Shnoz’s” girlfriend came to visit him in prison. Understanding the struggles of her man, she decided to bring him a little gift. Wrapped inside a small rubber balloon, she placed a small nug of cannabis for him to enjoy at a later time.

With no time to think, “The Shnoz” stuffed the package up his nose before being caught by the guards. Deep within his nostrils he managed to hide the package in plain sight. He finished up with his girlfriend and waltzed by the guards without a problem. His plan worked! He now was one of the few inmates with cannabis on his person. Oh the joys of victory!

Later on, “The Shnoz” tried to remove the package from his stellar hiding spot. Using his finger, he began digging around. He could feel it, but there was no real way for him to grip it. Every time he touched the rubber-wrapped bud, he would push it in deeper.

Until he reached a point where he couldn’t feel it anymore. Perhaps, it went down his throat and he ate it he thought. After a while, he simply gave up his quest to fish out the contraband and accepted his theory to be true.

He continued with life none the wiser. He did experience some unforeseen consequences, like spontaneous headaches, sinus problems, and trouble breathing out of his right nostril.

Eventually, “The Shnoz” was released from prison and went about his life doing things that only “The Shnoz” knows about.

“The Shnoz” completely forgot about that fateful day in an Australian prison, where he so wisely used his nostrils as storage space. However, his body didn’t. Deep within his sinuses, he had an obstruction that would later shock doctors and teach the internet a new word.

Due to “The Shnoz’s” visit to the doctors due to his headaches, they ordered a CT scan of his brain, only to discover a “rock-like-object” within the scan. This prompted them to quickly remove the object that turned out to be a “rubber capsule with degenerate vegetable/plant matter inside”.

It turns out that “The Shnoz” did not eat the baggy as he previously thought. It was logged in his nose for eighteen years, petrifying over time.

While this might seem odd, the idea of things petrifying in your nose is nothing new. In medical terms, they are called “Rhinoliths” which is literally translated to “nose stones”. Some cases of rhinoliths date back to the 1650’s and while it’s not super common, it does occur.

Rhinoliths are stone-like concretions formed by the gradual buildup of salts around objects not typically found within the nasal cavities[Source]. This can include things like bone fragments, hardened snot or blood clots, to externalities such as beads, buttons and seeds. Shit that toddlers tend to put up their noses.

In the case of “The Shnoz”, it was his rubber packed bud that petrified over the course of 18-years. Suffering 18-years with sinus infection and breathing troubles merely over sneaking in a bud into prison.

Fortunately for “The Shnoz”, once the doctors removed the petrified bud, his sinus problems and breathing problems disappeared.

Nonetheless, one could imagine finding that foreign object up the nose of a grown man who completely forgot on how it got there, to be a testament that “reality is stranger than fiction”.

Can we learn anything from this?

At the very least, this is a cautionary tale about people sticking things up their noses. While rhinoliths are not common, they can happen. This is typically something that people do when they are toddlers…or apparently prison as well.

For the rest of us…this story is a pleasant, somewhat comical distraction from the repetitive nature of life. A little nose candy to spice up your day.