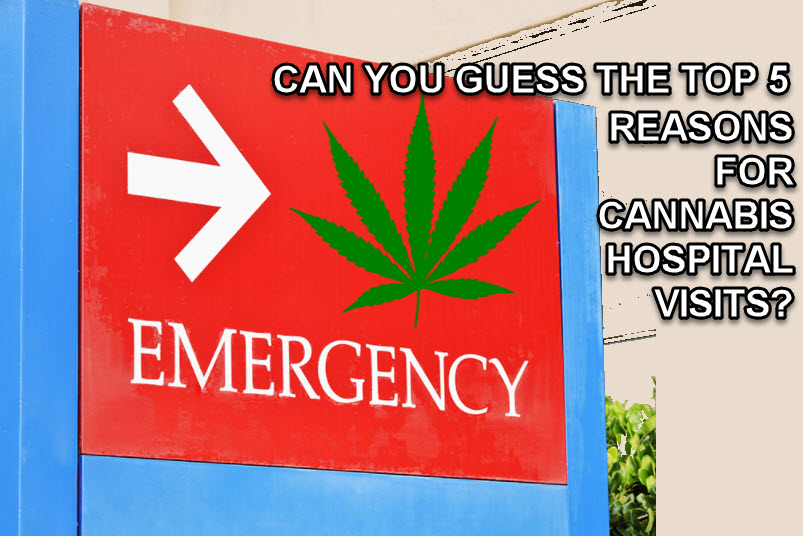 There’s nothing else on earth that helps humanity more than cannabis. It reduces opioid dependence and overdose, creates jobs, cures cancer, saves lives, saves the planet, and so much more. I’ll give you a month’s worth of my salary if you can name something else that does this job better than cannabis.

While ideally, our utopia would be a world where cannabis is free for all and available everywhere, we can’t ignore the small fraction of problems that some experience because of it. Addressing these issues is the only way that we can legalize cannabis effectively throughout the country with relevant guidelines. Some of the most common public health problems caused by cannabis were recently revealed in a new study published in the American Journal of Health-System Pharmacy. The review uses data derived from Colorado to discuss the most common reasons why people are sent to the emergency room due to cannabis, which policy makers can use as a basis for improving the legal framework.

Inexperienced individuals still attempt to make their own BHO (butane hash oil) extractions at home, which can result in deadly explosions. BHO production is one of the most controversial topics in the industry and for good reason. Without state-approved equipment or professional training on making your own extractions at home, things can take a dangerous turn. If you really must make your own cannabis extracts at home, opt for safer options without the need for explosive solvents such as using a Rosin press. “In July 2015, a law was passed that explicitly made manufacturing hash oil using flammable solvents illegal,” write the study authors. “Anecdotally, the effect of this legislation has had a minimal effect on the number of burn patients admitted to our institution.”

Fake cannabis is deadly, but people still continue to use it despite living in a state where adults over 21 can legally purchase the real thing? Synthetic cannabis, also commonly known as K2 or spice, is still all too easy to get a hold of and this is something that policy makers have the power to address. The Colorado report discusses the case of a 24-year-old man who had to be sent to the emergency department after suffering a seizure because he consumed synthetic cannabis bought at a head shop.

Cannabinoid hyperemesis syndrome (CHS) is a condition wherein individuals suffer from vomiting due to heavy cannabis consumption. Our knowledge on CHS is still in its infancy, but it seems to be curable just by quitting cannabis. “A 32-year-old man came to the Denver Health Medical Center ED with a 12-hour history of intractable vomiting and epigastric pain. Throughout the interview, the patient was retching uncontrollably. The patient reported several similar episodes over the past 2 months requiring medical care. Laboratory tests were conducted but unremarkable other than a THC-positive urine drug screen,” said the review. It’s clear that much more research is needed on this subject, as we know cannabis to be medicine for vomiting and nausea and not a substance that causes it in certain individuals who smoke daily, sometimes up to five times a day.

CHS was first discovered in 2004, when Australian scientists noticed that patients with cyclic vomiting symptoms were also chronic cannabis users.

Cannabis edibles has been placed on the hot seat for many reasons, but most worrisome of all is accidental pediatric ingestion. Should the parents be blamed for not keeping their edibles out of their children’s reach? “Children are at particular risk of cannabis toxicity because cannabis-containing food products, known as edibles, look extremely similar to regular candy,” write the authors. “Also, we have found that the severity of symptoms from marijuana exposure has worsened due to the high THC concentration in edibles.”

This is a problem that some states are already beginning to address, such as in California where a proposal has just been sent to Governor Jerry Brown prohibiting local companies from selling edibles that resemble an animal, person, fruit, or insect. Meanwhile, other states also require childproof packaging, or that packaging be devoid of cartoons or other images that may be attractive to children.

Acute intoxication basically means that a person ingested too much cannabis. “The number of marijuana-related ED visits has nearly doubled since the drug’s use was legalized in Colorado,” said the review. They also mention that the rate is higher for non-residents, tourists who come to Colorado. With the increase in cannabis tourism, the statistics are higher because there are cases that inexperienced tourists just don’t know what “too much cannabis” means. Dispensaries in Colorado do take the measures needed to educate their consumers on cannabis but perhaps it isn’t enough to reach tourists.

What do you think the government can do better to prevent these problems?