Clearing the Smoke for Lawmakers on their “Concerns” about legalizing Cannabis

Even the most conservative among us can no longer deny the fact that legal cannabis is coming to the world. All over the globe we have seen grassroots movements working tirelessly to loosen the grip on prohibition. One place where the debate is heating up is in Connecticut.

Lawmakers and other decision-makers are debating about whether or not they should legalize cannabis in their state. While, it might not be news to report on one single state that is legalizing [seeing that so many of them are], it is important to address the “concerns” lawmakers might have when considering this change in policy.

The questions and comments are often repeated whenever legislators come together, and for the sake of silencing all concerns, I decided to write this article.

Focusing solely on the questions emitted by the Connecticut Lawmakers, we’ll be going through each point and providing some perspective on the issues.

Is Cannabis the Big Tobacco of the 1950s

“As time has gone on and as research has come forward I have become more and more adamant that as a nation, this is a mistake in what we’re doing… This really is the commercialization of a drug that is being disseminated onto our residents for people to make money. It is the new big tobacco from the 1950s.” – Rep. Vin Candelora

There are vast differences between tobacco and cannabis. Sure, they are both plants…however this is pretty much where the similarities end. Unlike tobacco, the cannabis plant is filled with compounds known as ‘cannabinoids’. These cannabinoids mimic our own endogenous-cannabinoids produced in our bodies.

In other words, unlike tobacco, our bodies are hardwired to accept cannabis on a genetic level. Furthermore, while tobacco did implement similar “medical claims”, cannabis has delivered on many of its promises and as research continues, will continue to do so. Therefore, comparing cannabis and tobacco already means that the speaker (Candelora) is ignorant of the very topic he is talking about.

One of the major issues these lawmakers have when legalizing is the impact of “drugged driving”. They fear that if we were to legalize cannabis, that people will be stoned driving all over the place.

“I would like you all to pause and think about what might happen when we have people driving on I-95 stoned,” said Dr. Deepak D’Souza, a psychiatrist and researcher at Yale University School of Medicine who has been researching marijuana since the 1970s.

We don’t need to pause and think about it…it’s already happening. People have been driving “drugged” for many moons now. We haven’t seen an increase in traffic fatalities that is statistically significant in states that have legalized.

Of course, no one is advocating that we drive around stoned, but the fact of the matter is that they have. Furthermore, the impairment from cannabis is far less severe than the impairment of alcohol. While the technology for detecting impairment in relation to cannabis isn’t quite there yet…officers are being trained to detect it via a series of questions and tests. This too isn’t fool proof, however it’s a start. If having “stoned drivers” on the road is a concern, I also make the argument that we should outlaw alcohol once again…seeing that the logic is “if it’s illegal people won’t do it…” Oh wait, they tried that in the early 1900s and created the Mafia. I don’t know if he remembers, but I think it’s important to mention.

Another concern is that if we legalize, more kids will smoke. This is failed reasoning because alcohol and tobacco are legal. Prior to the legalization of cannabis in several states, kids often remarked that it was easier to find weed than booze.

The reason? Because under a regulated market, licensed retailers check for I.Ds. Something that a street dealer doesn’t do. Therefore, legalization is the safest bet for the kiddos. Within an unregulated market, you have no legal protections for your child. If you think making something illegal will stop people from selling it…well, you haven’t been aware of the past 45+ years of the War on Drugs now have you?

Marijuana is not a Harmless Drug

Nobody is saying that it’s “harmless”. However, in comparison to the other legal drugs out there, you know the ones that are aired during the Superbowl…it’s the most harmless drug out there. While some people might become dependent on the plant; this only applies to the minority of users. More than 90% of users will never have a problem with cannabis.

This can’t be said for alcohol. Once again – if safety/health is your ultimate concern, then shouldn’t we be advocating making alcohol illegal again?

This argument supposes that cannabis is a powerful mind-bending substance. It claims that people will have work-related accidents, loss of work, damage to property, and so forth.  However, it’s quite obvious that these “thinkers” have never experienced cannabis personally.

When a user becomes more tolerant of cannabis, they learn to self-regulate. If I have something important to do, I don’t smoke a bowl before I do it. Some people will…of course, just like those people who put vodka in their water bottles at work.

However, the impairment from alcohol is far more severe than the impairment from cannabis. Additionally, the data from the states that have legalized suggests that this is not a concern. In fact, people who smoke marijuana in legal states come to work more often, take off fewer sick days and there hasn’t been an increase at work-related accidents.

Once Federal prohibition is lifted and the industry has had time to deliver a consistently cheap supply of cannabis at higher quality than the black market…it will shrink to an insignificant margin. 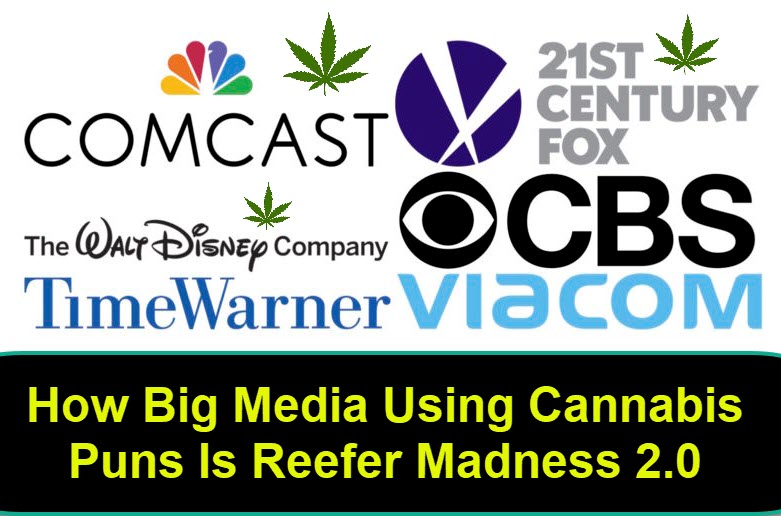 CANNABIS PUNS AND SLANG IN THE MEDIA, CLICK HERE.