Home Marijuana News Are Canadians Just “Too Nice” to Dominate the Marijuana Industry?

Are Canadians Just “Too Nice” to Dominate the Marijuana Industry?

Are Canadians Just “Too Nice” to Dominate the Marijuana Industry? 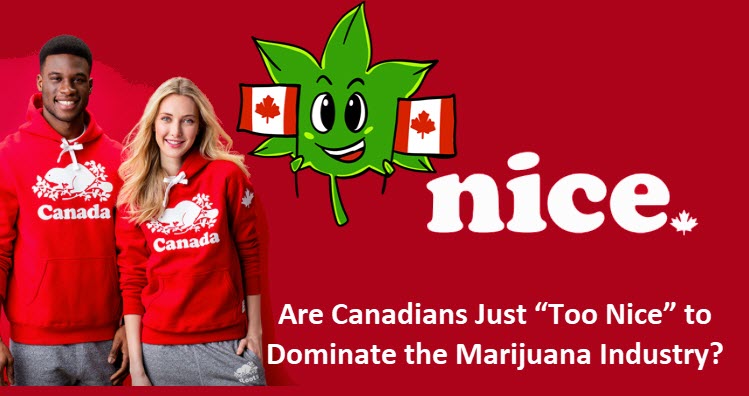 It was with great excitement that the team at Cannabis.net prepared for Canadian marijuana legalization on October 17th.  We were the only cannabis website in the world to cover the first piece of legal cannabis being sold just after midnight in Newfoundland by the CEO of Canopy Growth, Bruce Linton.  Bruce and the Canopy Growth team were so nice and accommodating that the question popped into our mind, are Canadians just to darn nice to dominate the emerging worldwide cannabis market?

Leading up to October 17th many leading Canadian cannabis companies who have hired PR agents sent out press releases that emphasized their client’s cannabis area of expertise and asked if Cannabis.net would like to interview said CEO, COO, or CFO.   We happily obliged and spent the week talking to Canadian CEOs, COOs, and VCs all working the in the cannabis space.  After 4 interviews and a trip to Newfoundland, we found out that Canadians were unbelievably nice, cordial, honest, and relatively laid-back.  As Bruce Linton told us, “We are Canadians, we love to play by the rules, pay our taxes, and not cause problems.”

But what happens to Canadians and the Canadian cannabis first mover advantage when the Federal law changes in the USA?

Canadians, who are super nice and super honest, can set a shining example for the world on cannabis legalization and structure, but once the USA legalized cannabis someway at a Federal level, this industry will turn ultra-competitive and cut throat.

When the USA changes the Federal status as it pertains to marijuana, it will allow MASSIVE amounts of investment capital to pour into the marijuana space.  Cannabis brands and companies will find it much easier to raise capital, go public, get investor money, and apply for loans once the USA changes its Federal laws. The rest of the world will soon follow the USA as it changes its cannabis scheduling.  The UN is currently reviewing the statue of cannabis now, waiting for a USA response to marijuana status.  The World Health Organization now supports the legalization of cannabis.  The US, with over 30 states having some form of legal cannabis program, does not have much of a foot to stand on internationally for keeping the drug a schedule 1 drug.  Over 30 countries are signed on to UN drug treaties to keep marijuana illegal, Canada and Uruguay are technically breaking the UN drug treaties right now with legal recreational cannabis.  Once the USA changes its scheduling, the rest of the world will fall into the same structure of the USA, like dominoes falling one after the other.

What does that mean to Canadians?

It will be a level playing field now and every country will have more money and investment pouring into the cannabis market.  This will increase competition, drive down margins over time, and put pressure on Canadian companies, who went public with certain models for revenue and profit, to work harder to achieve those levels.

Which begs the question, when the industry gets much more competitive and cut-throat (think Big Alcohol in the USA and Big Pharma in the USA), are Canadians just too nice and laid-back to survive on the global stage?

As margins compress in the industry, starting with the actual price of the plant, profits will become pressured and companies will look to partnerships, deals, and buyouts to keep profits rolling.  Will Canadians cut deals that may be “not so scrupulous” or “a bit shady”.  They may say no they will not, but what if American, Israeli, French, and German companies are all willing to get aggressive on deals and definitions of the law?  Will Canadians be willing to increase the “risk quotient” in their business or play it conservative?

The argument for Canadians rolling up their sleeves and getting dirty comes down to one thing, hockey.  They are the best hockey players in the world, and hockey is one of the toughest and most violent sports in the world.  Hence, Canadians are tough and nasty, but only when they need to be, like in a hockey game.  They also have first-mover advantage in the public markets and they are buying assets around the world at record pace before their USA and European counterparts can legally bid on the same deals.

The argument against is that the population of Canada is only about 37 million people for the whole country, from Vancouver to NewFoundland. For comparison, the state the California alone has 39 million people.   Does Canada have the money, manpower, and capital to keep its first-mover advantage?  The sheer numbers financially say no.  There is just so much money on Wall Street, in London, in Singapore, that the Canadian days of calling the public market shots in cannabis are numbered.  The USA, Europe, and Asia can outflank Canada on budgets, manpower, brain-capital, and risk tolerance.

If this industry goes the path of big alcohol, then massive brands will emerge and control many smaller brands under one umbrella is a similar way North American alcohol is dominated by 3 or 4 big companies. Over 90% of the beer sold in North America is controlled by 3 companies.  If cannabis goes that way, which we are already seeing in business models like MedMen and Acreage Holdings, will Canadian management teams get aggressive and ruthless in pursuit of profit?

It isn’t in their nature, which is a good thing overall, but they aren’t afraid of a good hockey fight, either.

FIRST SALE OF CANNABIS IN CANADA EVER, CLICK HERE.