Bloomberg goes Bust – Tell us what you really think about Cannabis wontcha? 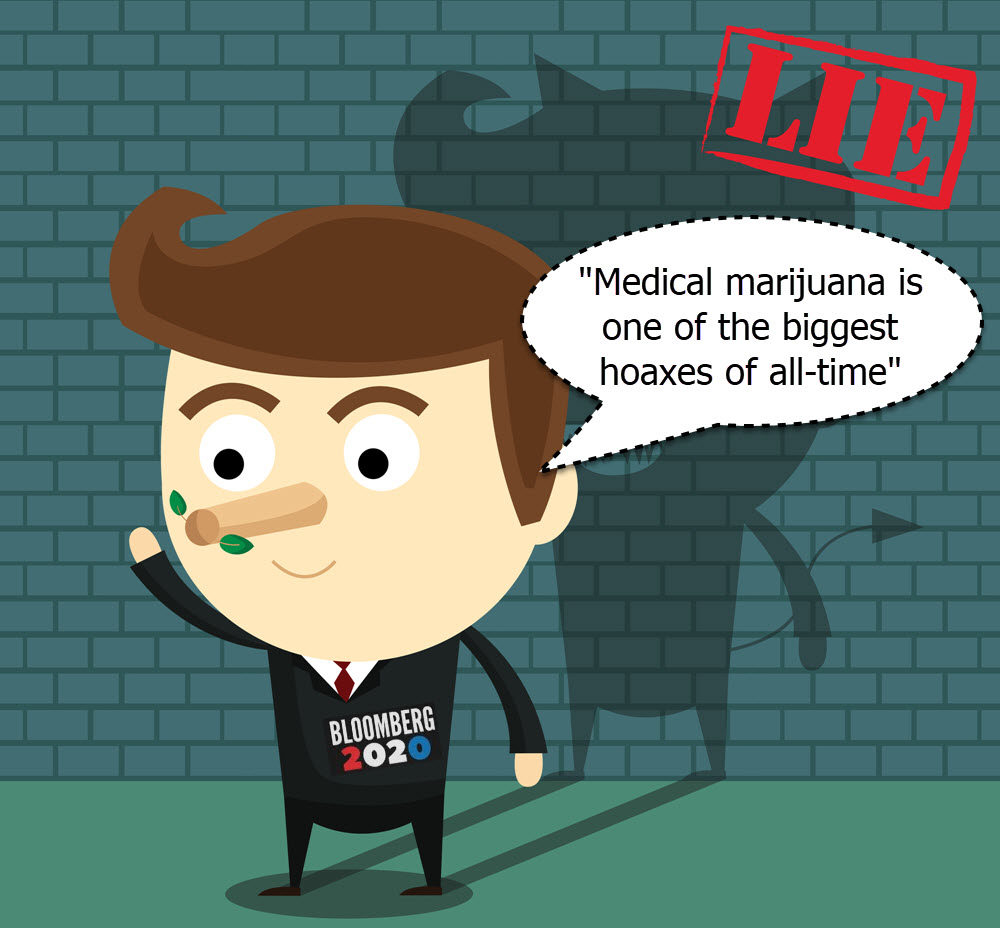 With 2020 into full swing we’ve got ourselves a pseudo-Game of Thrones situation gearing up in the democratic party. Emperor Trump managed to dodge the impeachment hearing and continues to sit on the throne of white.

While Trump is gearing up to make his reelection machine running – the Democrats are pointing fingers, throwing their allies under the bus and making promises to people in order to gain their trust.

While the Democratic Party seems to be wanting to push Warren or Biden – it seems that Sanders looks like the top dog according to the polls. The runner up seems to be Biden and behind him we’ve got Bloomberg.

It seems that Warren simply isn’t cutting the muster. Sanders resonates with young people and promises things like Free health care, education and of course – weed.

However, the other day I went about my merry in the Twitterverse when I started seeing people talk about Bloomberg. To be honest, I didn’t even have Bloomberg on my radar. To me – it’s either going to be Sanders or “the candidate the Democratic Party wants to force on you”.

This candidate is thought to be Biden – but when I noticed how the dialogue changed towards Bloomberg – well, it made me have to take a closer look at him.

What does Bloomberg think about cannabis?

Bloomberg was never a fan of cannabis reform but as the country is shifting to a more inclusive approach on drug policy – so the slimy politicians change their views. Bloomberg was once very hostile to the idea of cannabis legalization and now “supports decriminalization”.

However, as reported by Marijuana Moment – Bloomberg was caught on tape talking a whole load of shit about cannabis.

When asked what he thought about Colorado ending cannabis prohibition he said it was, “A Terrible, Terrible idea”.

This – despite the fact that he admits to smoking weed in the 60s. But hey, “Do as I say not as I do” hey Mike?

He also compared cannabis to diabetes, car accidents and other public health problems – something that we should avoid.

What he thinks about the notion of the regulated market being a better deterrent to youth consumption he said; “even if you have a law that says we’re not going to sell it to them, let’s get serious: if there’s more of it around, they’re going to get it.”

And while he thinks cannabis legalization is one of the “stupider things to do” – the 440,000 people who were arrested during his tenure as Mayor would disagree.

Will Bloomberg be a viable candidate?

In all likeliness – no.

Bloomberg might have gained some points early on – however we can see that the democratic party has a hard on for Biden or Warren. They hate Sanders for some reason – maybe because he might be ballsy enough to actually fuck some shit up – BUT – Bloomberg’s antiquated stance on cannabis reform will not get him elected.

Couple this with the idea that he’s a billionaire who is completely out of touch with what the “common man” actually needs.

Some democrats might think that he’s a viable candidate BECAUSE he’s a billionaire. Someone to give Trump a run for their money!

However – do you really want fucking billionaires playing Game of Thrones with the United States of America? I mean – it’s fine to troll politics every now and then – but condoning such a thing seems to be the markings of the end of the US as we know it.

Nonetheless, I’m almost certain that some angry liberal is sipping on their wheat-milk considering to give Bloomberg their vote because he might be a viable candidate against Trump. To those people I implore you to at least think about the children.

We’ve been riddled with antiquated drug policies for almost a century now. Drug reform has taken a back seat for many decades now – millions of people have gone to jail and lost their liberty. Hundreds of thousands have lost their lives in this senseless policy – and if we still have candidates that are against drug reform – they are not here for your best interests!

The world has gone far too political over the past few years. Nowadays – friendships end over who you voted for. Let’s stop this insanity for just a moment.

We are all in this together. Earth – and this includes the US – is all of our homes. Thus, “fucking over one group” is really fucking us all over. We should not follow teamster politics – but think about the greater good.

I personally don’t think your vote matters – but I could be wrong. I think that you are most effective in your community – changing laws in your municipality and so forth. However, in the spirit of democracy – this year, don’t vote party – vote policy.