My adventures in Cambodia and on the famous “happy pizza”.

One night 3 years ago, I was up late working when I received a promotional email from a low-cost carrier at 1 am with their usual seat sale alerts. I browsed the destinations on sale, and saw that a round trip ticket from Manila to Siem Reap was only around $ 100. I’ve never been to Siem Reap before but have long wanted to because I wanted to experience sunrise at Angkor Wat, see the other temples, and of course, try the happy pizza that Cambodia is known for.

I quickly sent text messages to friends to see who was awake and who might want to take the trip with me. In a few minutes, I received confirmations from 2 friends, made my bookings online, and eagerly waited 7 months for departure day.

We arrived at the Siem Reap International Airport at around 1 am. Locals donning beautiful traditional outfits in bright colors intertwined with gold, and spectacular sparkly head ware greeted us.

We were a group of 3 girls, and we arrived at the loft room at the gorgeous boutique hotel that we booked. We quickly unpacked and set off to Pub Street, home to dozens of bars (and cute backpackers).

One of my friends went online to research about where we could go for some “happy pizza”, and we found a small, nondescript bar just a little outside Pub Street. It had a big sign outside that said “Happy Special Pizza.” It was already around 2:30 am, it was quiet, and there was probably just one other tourist there aside from us. The walls were surrounded with large faded photographs of Caucasian tourists, possibly from the 70’s or 80’s, they did look happy!

We grab a table and ask for the menu.

Among the pizza selection, we see “happy pizza”, ordered it, and told the waitress to make it “extra happy.”

It arrived a few minutes later and it definitely did not look appetizing at all! It was just a plain crusty pizza with tons of cheese and green herby slime slathered on top of it. I guess that’s what they call happy pizza over there. The green stuff was supposed to be marijuana. 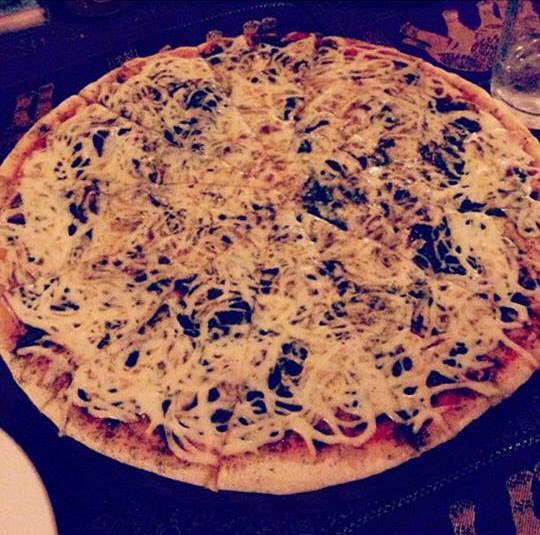 We eagerly ate a few slices each waiting for the “hit” to arrive.

We ordered another pizza. After a few more slices each, we FINALLY felt a little something, but MAN that was some weak ass shit. Anyway we decided to head over to some bars and make a night out of it.

We went back to that restaurant more time during that trip and ate SO MUCH pizza. I probably even had 6 slices at one point, until I finally concluded that Siem Reap’s weed just isn’t strong at all. But no way was I going to smoke some pot there. Shady vendors on the street would frequently come up to me asking if I wanted some marijuana. Nope, I’ve seen enough episodes of Locked Up Abroad to be terrified. Tempting as it was, I had a life ahead of me, many places to see, lovers to meet, sex to be had, and pot to smoke. I didn’t want to end up in jail in Siem Reap!

One afternoon we decided to relax in the pool of our hotel, since we spent a hot morning touring some nearby temples. We needed to cool off, and decided to give the happy pizza one more attempt. Since we were lazy to head out and it was humid, we decided to give another happy pizza maker a try. My friend picked up the phone, ordered us some cheese pizza and asked for it to be delivered to our hotel.

Again, she requested for the pizza to be made “extra happy.”

MARIJUANA PIZZA DELIVERY?? Must have been too good to be true because when it arrived, we had a few slices and it definitely had little or no pot in it! We were sad but I guess asking for special pizza to be delivered was indeed too good to be true, or maybe things just got lost in translation.

Anyway, with or without that special pizza, Siem Reap was all around amazing and I highly recommend that everyone make a trip out there.

You can read part #1 in the series, Epic High : Hash In The Mountains of Segada by clicking here!