How Cannabis Keeps You Sane in a Mad World

What is “Mind Control” and how cannabis inoculates you against it 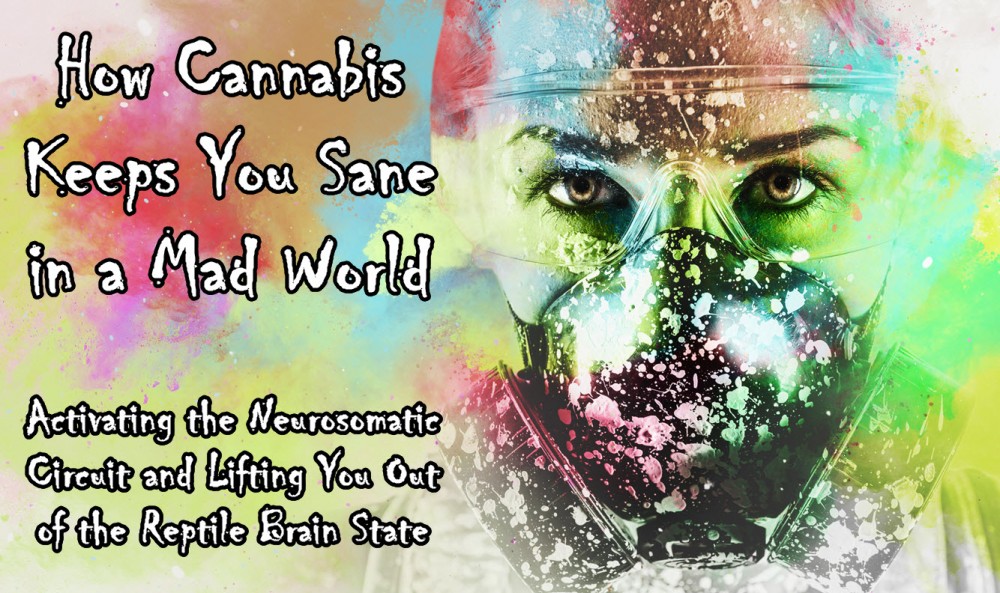 “The End is Nigh!” Have you ever thought about why these end-time prophecies are hashed and re-hashed throughout history? Perhaps – it is our collective memory as a species reminding us that throughout our longevity on this planet – we have come near permanent death on several occasions.

This – reminds us of our mortality and increase the sensation of “meaning” in our lives. It could very well be that the “apocalypse myth” is one of the major factors that drive innovation on this planet. While this could be true – there are other reasons why ‘doom and gloom’ is so popular and are consistently being updated throughout the ages.

Before we get rational – let’s get a bit whacky.

You’ve heard of the “Reptilians” haven’t you? The secret race of reptile people that wear human skin suits and essentially govern all of us “primates”. The political elite, international bankers and a slew of other powerful families are all part of this “reptilian-race”.

For the rationalist reading this – this is completely and utter nonsense. “Of course there are no reptilians wearing human skin suits! That’s Ridiculous!”

It is ridiculous if you take it at face value – but while the rationalist is very reasonable – most puritanical rationalists lack creativity and are incredibly rigid in their thinking.

Of course – there are people who believe the “reptilian myth” as truth – of which they would be able to show me cabinets full of documents, dossiers and ‘shit you won’t believe!’ The rationalist thinks these folk are idiots.

Those who can engage with abstract thinking however can see that the “reptilian fear” is something that is intrinsically part of “who we are”.

Carl Sagan referred to this as the “Reptilian brain” which formed roughly 500 million years ago and is the “oldest brain” in our brains. As we evolved – our brains evolved “over” these earlier brains and became more complex within its structures and functionality.

Needless to say – the reptile brain is very one-dimensional in its thinking. It’s the brain that is responsible for “Fight or Flight” responses and preserving life & safety.

Dr. Timothy Leary – clinical psychologist and writer – created a modeled representation of the human consciousness called the “Eight Circuit Model of Consciousness” where it incorporates how we act based on these evolutionary brains and the experiences that form us as we develop through life.

The reason we had to cover this first is because once you understand how this all works – you will begin to see why cannabis was kept illegal for so long and why there is constantly doom and gloom being advertised 24/7.

Needless to say – when this “primitive reptile brain” is activated – it overrides every other brain function such as critical thinking, empathy, etc. You basically resort back to a one-dimensional state of thinking where you cannot make complex thoughts, your body tenses up, you increase adrenaline and stress – all because you’re trying to preserve yourself.

The End of the World Keeps the Robots in Line

As of writing this article – the Corona Virus has been prompted up by international media to alarming levels. The hysteria on social media further pushes the idea that there is some “impending doom” coming their way.

This is reinforced when people go to stores and see anti-bacterial not on the shelves, they see a small shift in the economy, images of people in masks and quarantined zones being streamed on their phones – all the while telling their reptile brain RUN!!!!

Before Corona? WWIII! And all of this with the backdrop of “The world is heating up, ice caps are melting and we are the scum of the universe for existing and being the cause of all of this”.

This propels you into a perpetual state of fear and while we learn to “live with the fear”, it still chokes us and makes us become more “reptilian” in our behavior. Cold, selfish, inability to sustain complex thought.

But why keep people in a constant state of fear? Because – then politicians and the ruling elite have more leeway to rape, pillage and murder the rest of us.

Don’t believe me? What’s happened with the Epstein Case? Why haven’t we seen a single arrest of the affluent political/royals of the world who were frequenting his services for the past twenty to thirty years?

Oh – because the Corona Virus is going to KILL US ALL!!!

Why Smoking Weed is Medicine in a Mad World

Euphoria induced by cannabis allows you to escape your “reptilian dimension” and engage with higher consciousness circuitry – higher brains. In fact, according to the evolutionary model – we have three brains [Reptilian, Limbic and Neo-Cortex]. These higher brains become more active the safer we feel.

Smoking cannabis – disrupts the fear/stress responses to typical news. Where your reptile brain says “OMG THE CORONA VIRUS!” your neo-cortex rationalizes that you don’t have to worry about it because of “X” reasons.

Smoking weed – according to Leary’s model – helps activate the Neurosomatic Circuit which can be associated with flow state. It’s being able to see cascades of events, or gestalts as R.A.W called it. It removes you from our current perception of space and time – and projects your mind into the infinite experience of timelessness – where you can easily see the “whole of humanity” as opposed to the individuals you interact with.

This “god perspective” allows you to see past the brainwashing [which it is] and use your higher brain functions to make better decisions not only for you, but your family and those around you.

Cannabis – in a world where fear is a currency used to keep you in check – is vital to your overall health and wellbeing.

If you don’t want to be a robot – smoke more weed!

END OF THE WORLD, READ MORE…

END OF THE WORLD BLUNT, HOW TO MAKE IT, CLICK HERE.