How Cannabis Prohibitionist Spin Data To Suit Their Needs

How Cannabis Prohibitionists Change Rhetoric to Suit their Political Agendas 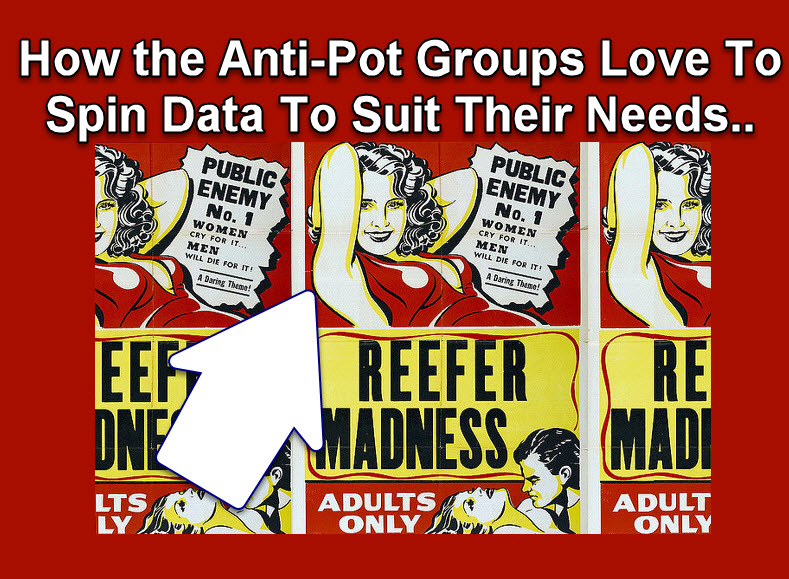 A recent federal report showed that youth cannabis consumption in the state of Colorado has dropped nearly 20% from 2014-2015 and 2015-2016. This should make every cannabis prohibitionist ecstatic because after all, the core of their arguments is to “protect the kids”.

While these findings are quite significant in for the cannabis community by strengthening their position that legalization is WAY more effective than prohibition in deterring youth consumption; prohibitionists managed to find a way to spin the data to suit their rhetoric.

The Mind of the Prohibitionist

One would think that if you’re against cannabis consumption in minors, you’d be happy to see that legalization is working. However, while the prohibitionists in Colorado [Smart Colorado], a puppet organization of Kevin Sabet, did acknowledge that the fact that kids are consuming less cannabis; they managed to use the data to promote their agenda.

While the demographical group of people from ages 12-17 dropped nearly 20% over the past two years, the consumption of the age group between 18-25 did increase. By how much you ask? 1.4%!

That is almost statistically insignificant. Nonetheless, the folks at Smart Colorado is using this to promote their rhetoric.

They are claiming that people who are of legal age should not have the right to make the decision to consume cannabis because their brains are still developing.

Yet, they have no qualms over alcohol consumption. Of course not, marijuana is the devil!

Seeing that Smart Colorado has lost the argument for youth consumption rates, disproven by empirical data, they are now shifting their efforts to “young adults”.

And once that fails, they will move onto seniors. Okay, that might not be true, but you get the point.

The point here is that prohibitionists don’t really have good arguments to maintain prohibition. They cherry-pick data, as they have done for the past 80 years to justify their draconian principles and oppress your free will.

They may claim it’s for safety, but in most cases if you dig a bit, you’ll quickly see the money trail connected to prohibition.

Now if you don’t believe my previous statement with prohibitionists simply moving up on the ‘age factor’, Kevin Sabet likes to cite studies that says that people’s brains are still in development from ages 25-30, and that weed can harm them. We went from worrying about adolescents to full blown adults in the bat of an eye.

Here’s a bit more of the political agenda of Smart Colorado as was commented by Henny in relation the survey data;

“Smart Colorado is encouraged by a decrease in past year marijuana use for Colorado kids ages 12-17. But that optimism is offset by an increase among those ages 18-25, with nearly half reporting past year use, the third highest rate in the nation.

“This is certainly not the time to let our guard down as the youth marijuana use rate in Colorado remains among the highest in the nation, and regular use by 18-25 year olds is stunningly high.

In other words, despite the fact that the data shows that legalization efforts is curbing teen cannabis use where prohibition failed, we need to be concerned about legal adults (save those who are under the age of 21) because of their brains.

First of all, Henny, if you can drive a car, drink alcohol and die for your country…you should be able to legally consume cannabis without having the fear of going to jail. Trust me, everybody that actually smokes weed knows that the risks you tout are far less severe than you let on.

You may have known this if you smoked weed, but you don’t. You rely on hearsay, you ignore data when it’s staring your straight in the schnoz and it’s quite obvious that your political rhetoric has hijacked your critical thinking abilities.

We should be celebrating the fact that with legalization in place, we’re not seeing an increase in teen use and as the years continue, people will actually get smarter [see what I did there] about consumption. Remember, cannabis legalization is still in its infancy and there are a lot of wrinkles to iron out, but from what we are seeing the world isn’t ending and the “hazards” you have touted for so long has not come to pass.

WHEN ANTI-POT PEOPLE RUN OUT OF REASONS , CLICK HERE.