Home Marijuana News If Everyone Smoked a Bowl Together in 2019 Would There Be World Peace?

If Everyone Smoked a Bowl Together in 2019 Would There Be World Peace?

If Everyone Smoked a Bowl Together in 2019 Would There Be World Peace? 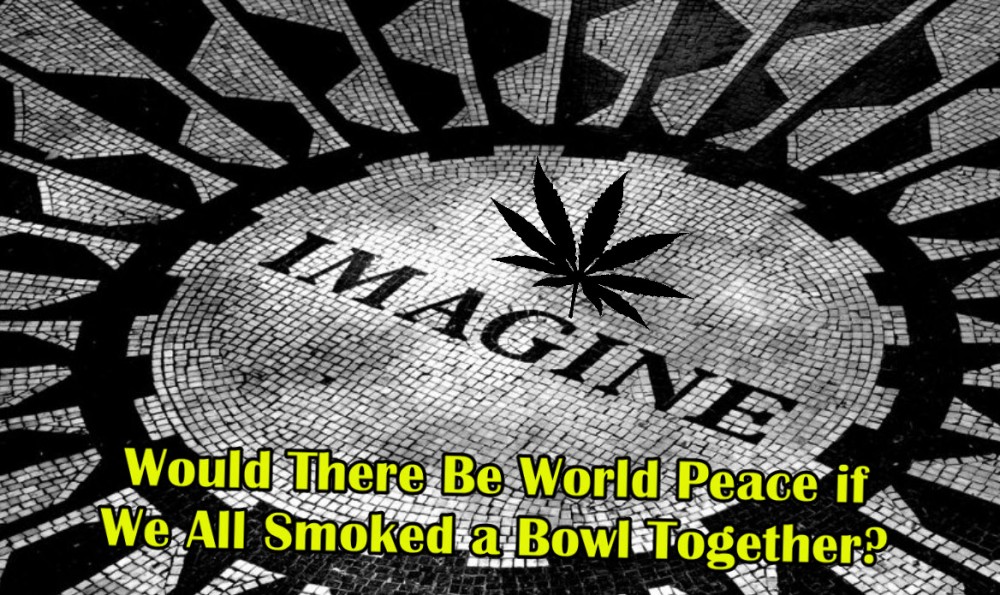 What is going on in the world in 2019? We’re debating the most idiotic shit on the planet, getting angered by things we cannot control and hating on our fellow human because of their apparel. The world is currently in a Flustercuck and something needs to be done about it.

My original solution would be to simply make one day where everybody eats a few magic mushrooms on the same hour and contemplate their own existence. Perhaps, with an extreme action like that will we wake enough people up to realize that politics, economics, religion, philosophy, and all the isms you can think of…is nothing more than JUST A GAME.

However, I understand that we’re not at the stage in society where psychedelics is embraced. We’re only barely allowing weed to go mainstream and I believe it should take between a decade or two for psychedelics to make its comeback into mainstream society.

The support for weed is at an all-time high, however, the political division in ideology as well. People are no longer tolerant of opposing views. They simply blindly hate the opposition party without ever exercising critical thinking.

Offense is the currency of the ignorant and weak willed

It seems that we have embraced a culture of offense. It doesn’t matter on which side of the isle you stand; people are no longer tolerant of difference. Even though the dialogue is surrounded by the idea of “Tolerance”, just read the comment section of any inflammatory article about race, religion, sex, politics, and so forth.

Now I’m not saying that these things aren’t important. What I am saying is that the debate surrounding these topics are not helping anyone.

Firstly, an inflammatory comment doesn’t change the topic being discussed. Secondly, your opinions on social media means absolutely nothing within a real world application.

All we’re doing is shoving shit in each other’s faces hoping that someone might “see us” and “acknowledge our existence”. However, the overall impact you have on any particular issue is non-existent.

Why all the Offense?

I don’t know why the ideologies of the world have become so polarized. I have theories. We’ve adopted Teamster Politics, where we pit ourselves against each other with the hopes of convincing others to adopt our team’s policies. Social Media became a magnifying glass to human indecency, outrage and intolerance.

Additionally, social media elevated the individual into a false sense of importance. We believe that by us, interacting with an article or news story, provides some insight or validity to the arguments presented. When in reality, we’re just noise shouting at more noise.

We have bought into the ideas presented to us and made it form part of our identities. “I’m a Democrat!” or “I’m a Republican” somehow now becomes a part of who you are, when in reality…you are not a democrat nor a republican in the purest definitions of the terms.

Everybody chooses what benefits their own narrative and nobody completely agrees with the policies of their parties. Yet, when an opposing view comes into play, we abandon our critical thinking abilities and chant for our teams to win…irrespective if it’s good or not.

By reading the title of this article, I suggest people sit back and smoke a bowl. I suggest we realize that our opinions are like assholes, “It’s good to have one, but not good to flaunt around in public”.

I’m also not saying that “smoking weed will cure the world of their problems”, but there is no doubt that smoking cannabis helps take the edge off. It allows us to view the world slightly different. It gives us that second to reflect on our opinions and what truly matters in life.

Cannabis allows you to realize just how silly it is to argue online with a bunch of strangers over things that don’t affect your life directly.

Sure, the political scene globally is completely ludicrous. Sure, there are things like racism, sexism, oppression and so forth. But bickering amongst ourselves will not change these things.

Rather, if someone offends you…brush it off and keep on going. Offense can only be taken, never given. The injustices of society will only be rectified when enough INDIVIDUALS take a stance to correct the ills flaunted in our faces every day.

Don’t debate racism, stand up against it. Don’t get angry, use logic and reason to point out the follow of the opposition. Don’t get inflamed because someone is wearing a shirt or a hat that you don’t like. Rather, sit back, smoke a bowl and watch the animals fight each other.

So the next time you come across a trivial social issue, rather put down your phone, smoke a bowl…dance, play music, make some art, have some sex, do anything else that immerses you in the moment of now as opposed to fighting virtual enemies that have no real impact on life itself.

In other words, Chill the F*** out and smoke a bowl…life is not as difficult or evil as you imagine. The only thing that can ever get hurt from name calling, political discourse and so forth…is the ego.

When shit gets physical…well, that’s an entirely different story. But you’ll quickly learn that most individuals avoid physical interactions and in most cases, only words were thrown at each other.

CAN HEMP SAVE THE PLANET BEFORE THE FLOOD, CLICK HERE.