Illinois’ Black Market Weed Problem Mimics That of California and Canada in This Way? 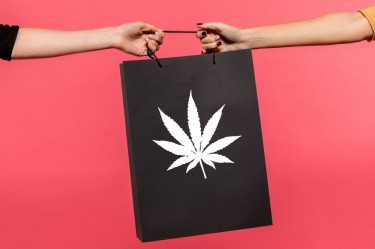 Illinois is having similar problems than Canada, California, and many other states that have legalized cannabis – a strong and thriving black market!

Depending on who you ask, there are billions of dollars of cannabis being sold illegally in these legal states – but I wonder why that would be?

It couldn’t be because of the exuberant taxes that authorities have smacked on top of the price of weed making it roughly $ 20 more expensive than what is offered on the black market.

It’s the same old story – people want cannabis legal, cannabis meets politics and then regulators “tax the living hell” out of the legal industry because of “reasons”.

What reasons could possibly justify so much tax on the plant? Well, depending on which state agency you ask, they will come up with an infinite number of reasons to justify their existence.

Potentially, their existence is warranted and in these cases – the industry is not opposed to paying those taxes.

However, in many cases – such as the case of California – the tax system is nothing more than a corporate money grab posing as a social justice issue.

The very politicians that voted for the prohibition of cannabis are now salivating at the mouth when considering the sheer amount of tax money they can make on the legal commodity.

When greed then takes charge – what follows is a black market response that undermines the legal market and simply continues to thrive as the cheaper alternative.

It’s not like illegal players aren’t already risking their freedom for the mighty dollar – under a legal system, why would they stop?

Does this mean that we’ll never be able to get rid of the black market?

The short answer is – YES!

The black market will never go away, but that isn’t because we legalized weed or not. In fact, there’s a black market for every legal market on the planet – including shoes!

The cannabis market only saw an over-inflated-black market due to prohibition that made it illegal for legal competitors to take up the market share.

Thus, black market players could continue to do whatever they want without any real competition. It’s the reason why ‘Mexican Brick” became so famous back in the day.

Mexican Brick is the epitome of black market capitalism under their state-enforced monopoly over the cannabis market.

Essentially, Mexican Brick is the lowest cost product that can be produced at mass to a consumer base that didn’t have many options.

Grow them for pennies, sell them for dollars!

However, when cannabis legalization stepped into the limelight – something changed. The back market “ditch weed” began fading and more often we began seeing sophisticated grow operations pop up everywhere.

The black market was beginning to imitate the legal market, and suddenly – growing quantity meant less than growing quality.

Why sell for dollars when you can sell for hundreds or thousands of dollars?

Nowadays, the market share of Mexican Brick weed is so low – it’s almost impossible to find.

The black market can never die!

As long as there’s a market – there will always be a black market. Players who don’t follow the rules, who copy the products of others and unload counterfeit products onto the market.

These black market players are in every single market you can think of. Including children’s toys! In most cases, black market products come from places like China or Indonesia – where they are produced in mass for pennies on the dollar.

Then, they are sold in markets such as the US to drive up profit margins. In many cases, the same factories that produce the original brands also buy the rights to the design, and then can produce their own copies of the product as well.

That’s why “high-phones” come out so quickly after the latest iPhone is released on the market.

When it comes to weed though, the Chinese owns most of the world’s CBD and industrial hemp supply – but lack within the production of recreational bud.

Here’s where the Mexicans and illegal growers in the US & Canada rule. Mexican Cartels have many funded operations growing on both sides of the border.

They still grow ditch weed – but this is meant nowadays as a smokescreen for the real products – heroin, meth, and better weed.

In order to stroke uncle Sam’s ego – cartels give them ditch weed as means of justifying their existence while delivering their real products at some other point of entry.

Everybody knows this – but we keep the charade alive.

Nonetheless, we have seen a shrinkage within the influence of Mexican Cartels in the legal marketplace. While they still wish to have some footing on the black market – many US growers are outpacing them with production and scale.

Drug cartels now have to compete with the police & the legal market, making their interest in the market far lower.

Nonetheless, they do have some stake at the came considering that we’re talking about billions of dollars annually.

As with all markets, the black market will never perish – but in the case of cannabis it will eventually be mostly a “minor” issue for law enforcement.

What needs to change?

If you truly want to keep the black market as small as possible – the only way to do this is to make access to the legal market so easy and cost efficient that “anybody can do it”.

The black market does not like to compete with “everyone” which is why you hardly hear of the “potato mafia” or the “carrot mafia” coming in to muscle you out of your home grown crops.

We need regulators to start at the lowest possible tax margins and slowly increase it. You have to give at least 5-years for the market to establish itself before you can raise taxes.

Otherwise, you cultivate the perfect environment for black market sales.

What needs to change is we need politicians that understand this fact, and can translate it to policy.

MORE ON ILLINOIS AND BLACK MARKET WEED, READ THIS..

WHY ILLINOIS RECREATIONAL LEGALIZATION WILL CREATE A HUGE BLACK MARKET!