Legal Cannabis Is Saving Communities Across The Country

Lives aren’t the only thing that cannabis is saving in the United States. Entire towns throughout the country are benefiting from money being pumped into them through the legal cannabis industry.

The economic boost the industry has given has significantly reduced homelessness, unemployment, and poverty. According to the Marijuana Business Daily, the legal cannabis industry has poured in north of $ 4 billion in sales last year, but small towns in the country are benefiting the most from these greens. In the 8 states where recreational use has been legalized, tax revenues and jobs have grown from the establishment of new cultivation facilities, dispensaries, and companies that develop infused products.

These are the 5 towns that have benefited the most from the green rush:

Sedgwick almost turned into a ghost town, but when Colorado legalized recreational cannabis things began to make a dramatic shift in this tiny area inhabited by just 150 people. In fact, right before a medical cannabis dispensary opened in 2012, officials started to discuss possibilities of unincorporating Sedgwick. That one dispensary eventually expanded into recreational sales, and people were flocking from Nebraska as well as across the state to buy cannabis. Old buildings were renovated, and a pot-friendly bed and breakfast was built in place of an old bank. Medical and recreational cannabis taxes helped Sedgwick create a maintenance fund that paid for equipment and brand-new street signs.

Retail cannabis sales in Aurora, Colorado generated money that was used to fix potholes, get the town water rights, even send teens to college, as well as pay for many other important projects. Aurora earned $ 1.5 million in taxes and the local government intends to use it to solve numerous problems. Portions of the tax revenue is being used to supply vans to nonprofit organizations so that homeless people can be transferred to shelters, while the rest of the tax revenue will go into the establishment of a new recreation center and fix infrastructure.

Trinidad is one of the most progressive towns in the United States when it comes to legalizing weed. The local economy suffered when two big natural gas and oil companies left, since they relied heavily on the coal industry in the past. The loss of two major companies caused the population to reduce by 10%. Today, there are around 8 recreational cannabis businesses that contribute to funds that cover costs of repairs in town, while sales taxes from the new shops have almost doubled the Trinidad city budget. $ 1.5 million in cannabis sales tax is being used to change up old infrastructure, pay some of the town’s debt, and revamp a block to built apartments for the art community.

Adelanto, a sleepy town in San Bernardino County, took a massive hit when the biggest employer, which was the Air Force Base, left. The rise of legal cannabis produced decent jobs for the population, around 40% of which live below the poverty level. Back in 2014, Adelanto had $ 2.4 million in debt, but one year later when industrial-scale cannabis sites started, the debt was reduced to just half a million dollars. Adelanto’s mayor revealed to LA Weekly that cannabis taxes are expected to add millions more to the city reserves. Additionally, there have been more commercial grow facilities that have sprung up so that even individuals without a college degree can have a chance to make a decent living.

In Huntington, an old railroad town in Oregon, legal cannabis is sold to more people than the total overall population. This town’s population has continued to dwindle since 2000, because a cement factory relocated, along with many residents who have abandoned ship. Two dispensaries located where an automobile service station and convenience store once were now sells pot to as much as 600 people a day, and Huntington is home to just a little over 400 people. This is because people travel all the way from Idaho where cannabis is still illegal, despite the fact that it’s still considered a federal crime to transport pot across state borders.

These towns are part of the many others around the country that are being saved by legal cannabis. On the other hand, towns that are anti-legalization are missing out on the economic benefits that cannabis is bringing. These towns just prove that cannabis legalization does much more than saving lives. 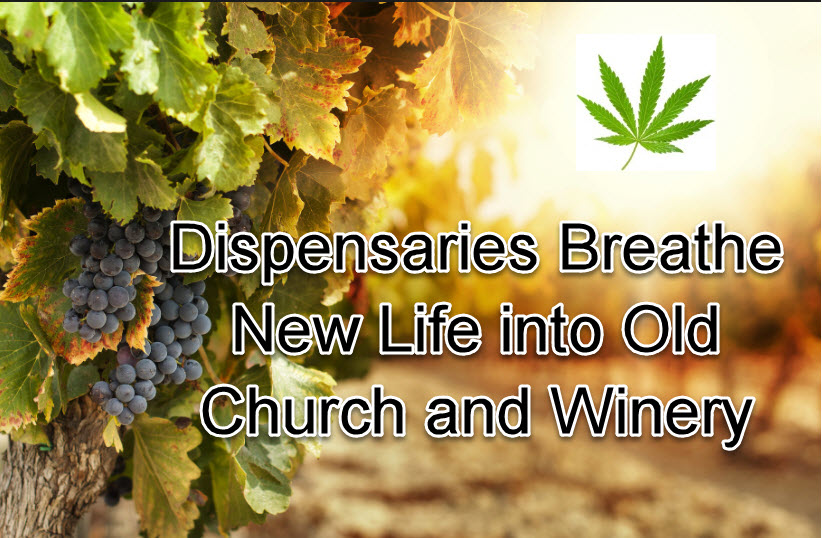 CANANBIS IS SAVING COMMUNITIES AND CHURCHES, READ THIS..

CANNABIS WINE IS HERE, CLICK HERE TO READ HOW TO GET IT..