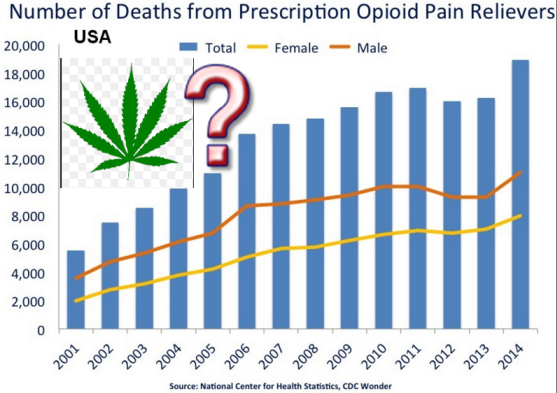 Medical marijuana has saved the day, yet again.

Prescription painkillers are one of the leading causes of death in America, with 46 people dying each day from opioids such as as OxyContin and Vicodin. Thomas Frieden, CDC Director has said, “We know of no other medication routinely used for nonfatal conditions that kills patients so frequently.”

Despite research clearly showing that high opioid doses directly contribute to an increased risk in overdose and even death, investigations have shown that pharmaceutical companies that manufacture these opiates still encourage doctors to prescribe strong doses.

According to a study published in the Journal of the American Medical Association, painkiller-related deaths have dropped an average of 25% in states that have existing medical marijuana laws as compared to states where the drug is still illegal.

The findings are in line with a Columbia University study held last year which found that marijuana use can treat painkiller addictions by minimizing symptoms of health-related problems due to abuse, and reduces withdrawal symptoms. When more states begin to legalize marijuana, cannabis can save more lives. The very same opioid medications that provide patients with temporarily relief from chronic pain are the very same medications that can be fatal for them.The use of medical marijuana provides doctors with a safe and viable treatment option in a regulated way.

Without more research, education, and advocacy efforts being done, opioid-related deaths might still rise since medical professionals who are authorized to prescribe these medications, are not aware of other (healthier) alternatives. When it comes to prescribing cannabis, many physicians are still faced with fear and moral ambiguity considering that their years spent in medical training did not include the vast historical uses and health benefits of cannabis. The fact that our own human body contains cannabinoids, the same as what is found in the plant, has not been taught to doctors.

Several studies now show that patients are benefiting significantly from the use of medical marijuana since it has been proven effective in treating pain while reducing severe symptoms associated with painkiller withdrawals.

According to Colleen Barry, health policy researcher at the John Hopkins Bloomberg School of Public Health in Baltimore, the shift became evident “quickly and become visible the year after medical marijuana was accepted in each state.”

While the use of compounds that have psychoactive properties still cause alarm in this day and age, it is something that regulation can help with so that patients who are truly in need can benefit from its medicinal properties.

If you liked this article, check out..

CAN WE CURE OPIATE ADDICTION WITH CANNABIS, CLICK HERE TO READ