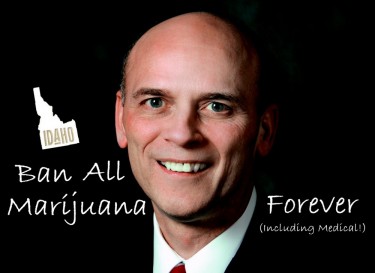 As the world continues to march towards a more tolerant future – a world where adults have a unique freedom over their own identities, autonomy over their own bodies and legal rights to explore non-ordinary states of consciousness!

There is one Senator who has said, “ENOUGH! WE MUST FIGHT THE TIDE OF PROGRESS AND REGRESS BACK INTO OUR OLD PURITAN WHAYS!”

If you’re not sure of who I’m talking about…I’m referring to Idaho’s own Sen. C. Scott Grow. “See-Scott-Grow” is a proponent of an amendment to FOREVER BAN MEDICAL, RECREATIONAL AND ANY OTHER DRUG to the state constitution.

If this passes, Scotty would have singlehandedly make Idaho the “why go to there” state in the U.S. What did he have to say about it all? Oh – the typical bullshit you’d expect from someone who’s name is a pun and still hasn’t “grown” to the maturity to allow adults to do with their own bodies and minds – whatever the fuck they want.

“When drugs are legalized that are currently illegal, it increases health care costs and crime,” Grow said, according to the AP. “This is about money. It’s not about caring for people who might have pain or sickness.” – Source

When you dig a bit further, realize the man was born in 1948 – three years after the Nazi’s were defeated, and you realize he’s an “elder” in the church – it makes sense that the Senator is trying to run his last “Hurrah” before checking out.

It seems that the ranks of the drug warriors are waning these days, and Grow seems to be one of the last true “I ain’t budgin!” politicians out there. Respect for clinging on to your failed value system that undermines the individual freedom and the very religious doctrines you so effortlessly integrate with your political standings.

The Problem with Idaho…

Let’s take a look at Idaho – the only state with some of the harshest anti-cannabis laws in the nation, surrounded by states with legal cannabis on the books. The proverbial “Bitch in the middle” and what they don’t like is all these pot heads bringing in weed from out of state and flooding them with high grade reefer.

And so – in a response to the “influx of cannabis” they are attempting to ban legalizing any that isn’t legal…forever!

In other words – let’s say that 15 years down the line, we discover some amazing property in LSD that can cure cancer immediately – like, without any issue – like you burp your cancer away…

Well, if you live in Idaho – you’d never be able to get that medicine because it’s a derivative from a drug that was “once legal”.

These Senators are essentially suggesting that they know more about medical science, the future, have 100% authority on “codes of morality and ethics” – and know with absolute certainty that even considering legalizing drugs “ever!” is a bad idea.

And with the resolution passing a Senate State Affairs Committee with a 6-2 vote with members voting along “party lines” – which really means, they didn’t think about it, consider it, or analyze any potential future hindrances. They simply automatically voted according to what was dictated to them due their party affiliation.

Way to go to represent the people you fucks!

Not even his family is in agreement with Grow

Turns out, that Old Man Grow has family who literally grows cannabis – in Oregon. His sister in law, moved to Oregon to get cannabis for her chronic pain. Her husband wrote a letter explaining to people the significant transformation he witnessed in his wife after switching to medical cannabis.

Grow’s own niece grows cannabis – where she treats her mother.

But despite there being someone within his own family that serves as evidence that cannabis is helping them medically – he still wishes to push on and let his family excommunicate themselves to another state that allows them live like responsible adults.

I mean – I guess there’s some sense of “bad-assery” if you’re willing to sack your own family for the sake of political gains….that or you’re a complete sociopath and probably have a few severed heads in the basement…isn’t that right elder Grow?

Of course, this is all speculative and beyond any reasonable interpretation of the character of Sen. Grow – which makes me completely within my right to come up with those fictionist claims.

The problem is that Sen C. Scott Grow is a person who – maybe has a chance to completely keep Idaho in a bubble from the rest of the world. I don’t think that politicians should have the right to dictate “forever” type amendments.

Blindly following politicians and their “tough on drugs” bullshit is what got us here in the first place. I can only hope that there is still some sense or reason in the state of Idaho – otherwise, I’m afraid it’s going to be the worst state in 2021. Especially if the feds pass some major cannabis provision.

THE KIDS WILL EAT EDIBLES REEFER MADNESS MYTH, READ THIS! 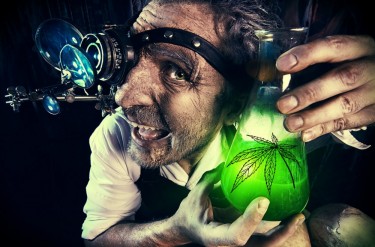 WHO IS FUNDING THESE FAKE CLICKBAIT MARIJUANA STUDIES?