Home Marijuana News Parents as Outlaws: Doing Whatever It Takes to Get Life Saving Medicine for Your Kids

Parents as Outlaws: Doing Whatever It Takes to Get Life Saving Medicine for Your Kids

Parents as outlaws: doing what it takes to get life saving cannabis for their kids

In 2019, cannabis is still considered a Schedule I drug in America despite legalization at the local level in over half of the U.S. This means the federal government still restricts its use due to their belief that the substance contains no medical benefit, and is prone to abuse. That makes medical marijuana illegal to transport across state lines and labels patients that do so federal offenders. Despite its current illegality at the federal level, the majority of Americans support patient access to medical cannabis. But even in states where medical marijuana is legal, parents treating their children with cannabis run the risk of running into severe issues with Child Protective Services.

Take Texan Mark Zartler, for instance. His daughter was born with cerebral palsy. By kindergarten, she had received an autism diagnosis and was violently striking herself in the face and head, sometimes for up to 12 hours a day. When her parents turned to antipsychotics, they noticed poor efficacy and unwanted side effects. Fed up, they decided to try medical cannabis, and the results changed their lives in two ways. First, it provided the relief their daughter desperately needed. Second, it put them at risk of 10 years to life in prison and losing custody of their daughter.

The issue of federal access to medical cannabis is reaching a head during the 2020 Presidential election, with both Democrats and Republicans promising leniency towards medical cannabis patients. Previously an issue concerning predominantly the Democratic Party, smaller numbers of Republicans have begun to voice their support for patient access, making medical cannabis a bipartisan issue for the first time.

Weediatrics: A covert Medical Mission, produced by Open Water Studios, is an upcoming documentary that follows average, American families as they venture across state lines to obtain medical cannabis in a desperate attempt to help their extremely sick children. As politicians continue to debate cannabis’ medical benefits, brave families are risking everything to save their children’s lives, and showing their faces with the hopes of ending prohibition of medical cannabis at the federal level once and for all.

“We didn’t set out to make a pro-marijuana movie. In a time when the country at large feels that there is so much progress being made in the legalization of marijuana, this film reveals the painful truth,” the film’s director John Ehrhard says.

His film features the testimonies of medical professionals and family members alike, and explains the efficacy of using medical cannabis to treat a myriad of conditions such as cerebral palsy, autism, epilepsy, cancer, and more. Where conventional drugs have failed, and therapies are limited in their effectiveness, parents have turned to cannabis compounds, predominantly CBD, to treat their children.

Unfortunately, families still face a number of obstacles in obtaining medical cannabis and finding relief. The documentary features many examples, such as a California family using CBD to treat their 7-year-old’s epilepsy. They were ultimately reported, and  charged with severe medical neglect simply for opting against the heavy antipsychotic medications legally available.

“The fact that the federal government is making us choose between breaking the law to help our children or watching them suffer is absurd,” cannabis educator Dr. Richard Temple says in the documentary.

He points out that cannabis is an effective medication because it draws on natural chemicals already present in your body. “You have an entire endocannabinoid system,” he says. “You are a walking Schedule I narcotic right now. The difference is yours are made within your body. Marijuana and cannabis work because they simply enhance you own body’s system.”

But parents who remain committed to using medical cannabis to treat their children are caught in a broken healthcare system, the fog of stigma, and a web of backwards legislation. While cocaine and opioids remain Schedule II substances open to research, cannabis remains Schedule I, which means the federal government has made the determination that it has no medical benefits and therefore cannot be researched.

This is one of the most toxic relics left over from the infamous War on Drugs. Essentially, law enforcement officials within the Drug Enforcement Administration feared that cannabis could soon become legal, making prosecution and their lives much more difficult. Their solution? Halt all research into the medical efficacy of cannabis. If no medical benefits can be reported, the plant will remain Schedule I, restricting it from research and keeping it locked in a limbo of illegality.

What research has been performed was not in the scope of searching for medical benefits, but for finding potential side effects, addiction patterns, etc. Instead of researching cannabis and its medical potential, the federal government had a field day making a case against cannabis and its users. Thankfully public perception is shifting, and Weediatrics: A covert Medical Mission hopes to play a major role in spotlighting the medical benefits of cannabis, leading to an eventual shift in federal policy.

“We’re not smugglers. We’re just moms who are getting medicine for our kids who are really struggling,” said one mother in the documentary.

And while each parent followed in the documentary is unique, the common obstacles they face remain the same: their sick and often disabled children have been failed by traditional medicine. These parents have found that medical cannabis works for their children, and now they are forced to make a decision no parent ever should—help their sick children and risk being arrested and reported to child protective services, or sit and watch them suffer.

“The war on drugs made doctors very afraid of cannabis. The fact that children in America might need cannabis for autism—same as with epilepsy—and the federal government restrains the doctors from giving them something that is helpful is what is known as a medical crime,” said Psychiatrist Alan Flashman in the documentary.

Set to screen its world premiere later this year, Weediatrics: A covert Medical Mission will tell the story of those families in the United States who are willing to risk it all to help their children.

PARENTS BREAKING THE LAW FOR THEIR KIDS, READ THESE..

PARENTS BREAKING THE LAW FOR THIER KIDS MEDICINE, READ THIS. 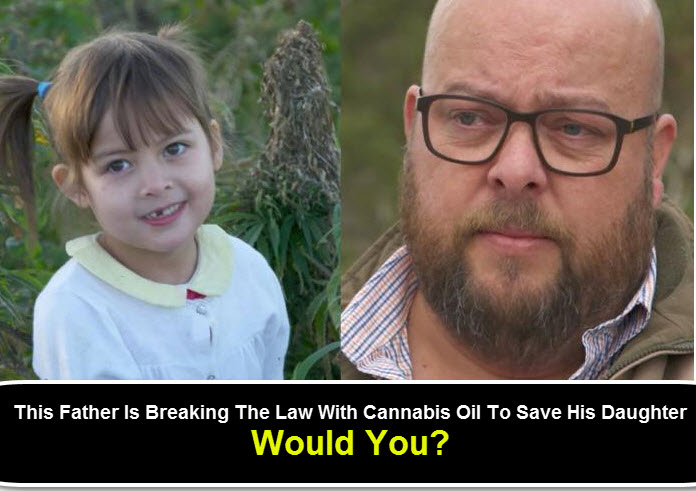 FATHER’S GETTING CANNABIS OIL FOR SICK KIDS, WOULD YOU?