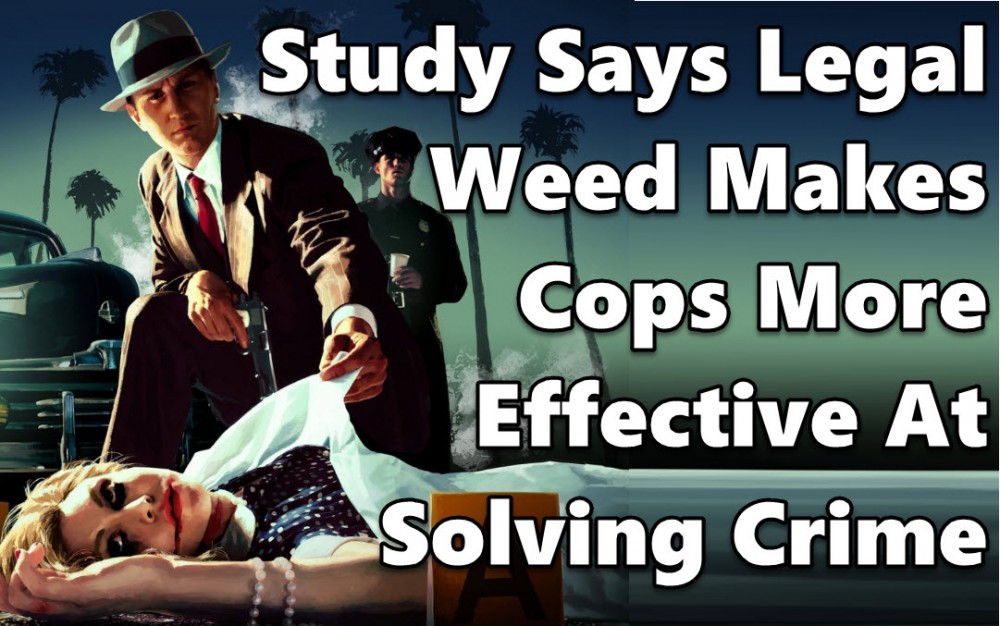 Researchers from Washington State University have found that cannabis legalization in Washington and Colorado have produced significant benefits in helping police departments solve other kinds of crime.

The study, which was published in the journal Police Quarterly, states that: “Our models show no negative effects in legalization and, instead, indicate that crime clearance rates for at least some types of crime are increasing faster in states that legalized than in those that did not.”

The definition of a cleared crime is one in which authorities have successfully identified and arrested the suspect, who is then sent to the judicial system for a trial. For the study, researchers analyzed crime clearance rates in Washington and Colorado from 2010 to 2015 taken from FBI data. They specifically studied the patterns in crime clearance and how legalizing cannabis in Washington (December 2012) and Colorado (November 2012) affected these trends. In both states, adult use cannabis wasn’t legalized until 2014 although certain provisions have been set in place allowing personal possession not long after the votes were confirmed. 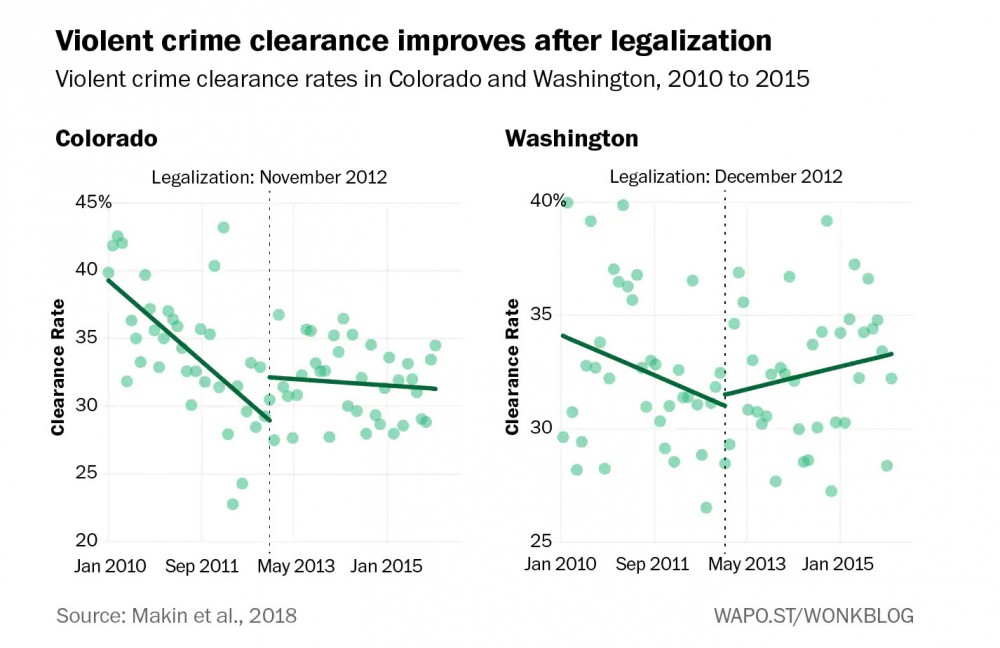 The chart shows how the clearance rates for violent crime changed before and after cannabis legalization in both states. Crime clearance rates show a drop prior to legalization, and afterwards they showed stabilization in Colorado while it displayed a reversal in Washington. The researchers also acknowledge that other factors could have contributed to the improvements in clearance rates, including an uptick in overtime hours, implementing new policing tactics, or a stronger focus on other kinds of crime.

They also state that since no other major public policy changes occurred in either states that could have impacted clearance rates, these improvements can definitely be attributed to cannabis legalization. “We think the argument that legalization did in fact produce a measurable impact on clearance rates is plausible,” the researchers concluded.

When it came to property crime clearance, the researchers discovered a sharp reversal in Colorado and a temporary improvement in Washington. They also assessed the patterns for certain types of crime, especially motor vehicle theft and burglary. “The clearance rate for these two offenses increased dramatically postlegalization,” they write. “In contrast, national trends remained essentially flat.” 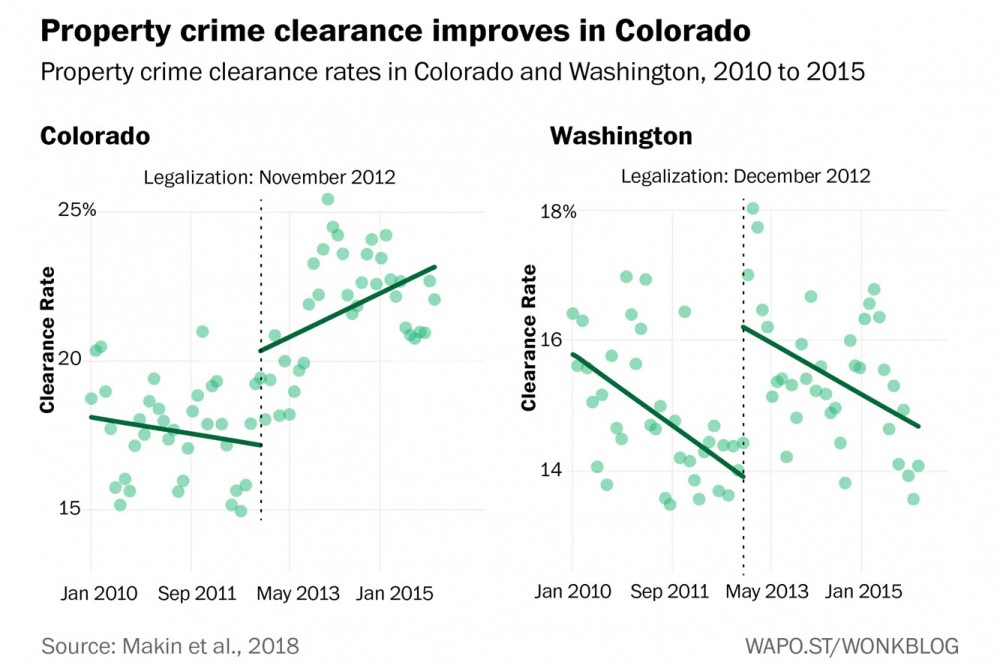 The authors also conducted a series of statistical exams to verify the findings reflected on their charts. “While there were both immediate and longer term differences between states which legalized and the rest of the country in terms of crime clearance rates, the long-term differences are much more pronounced, especially in Colorado.”

Legalization supporters tend to debate that releasing the cops from the burden of fighting low-level cannabis crimes would give them more resources needed to tackle serious crimes. The researchers echo this sentiment, saying: “Our results suggest that, just as marijuana legalization proponents argued, the legalization of marijuana influenced police outcomes, which in the context of this article is modeled as improvements in clearance rates.”

They also state that “There were no crime types in either state for which legalization appeared to have a negative impact on clearance rates.”

Majority of Cops Think Cannabis Laws Must Be Relaxed

Although the cops are more conservative compared to the general public when it comes to cannabis legalization, Pew Research Center found that 49% of police support recreational cannabis, 35% support medical cannabis only, and 15% think that it shouldn’t be legal. The study also took note that there was a general divide among police regarding the issue, but not as significant as the divide observed in the general public.

There has also been significant variation in opinions on cannabis use in our law enforcement rank and file, and while they are usually tough opponents of legalization, it’s clear that a majority of them now think that cannabis laws should be relaxed. In fact, the Law Enforcement Against Prohibition (LEAP) was launched in 2002, as a means for active and retired police offers to advocate against “the failures of our existing drug policies.”