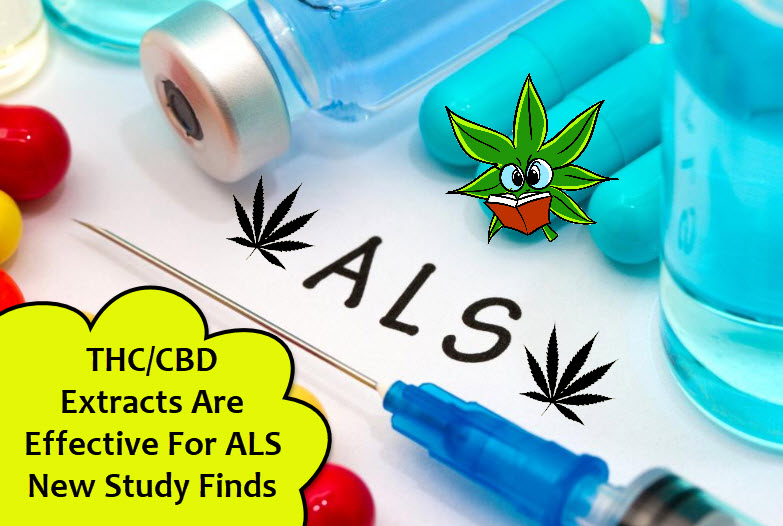 This is the same condition that affects the late famous cosmologist Stephen Hawking. Once you are diagnosed with ALS, it is irreversible, and the only available forms of treatment known are only able to inhibit progression of the disease. Muscle spasticity is a hallmark symptom of ALS, but others include muscle cramps, pain, fatigue, constipation, loss of coordination, depression, and many more. Without proper treatment, most ALS patients only live a maximum of 5 years because respiratory muscles no longer work.

A brand-new study conducted by researchers in Milan, Italy, revealed that near equal ratios of THC and CBD are effective in reducing muscle spasticity among ALS patients. The researchers administered nabiximols, also known as Sativex, to a set of ALS patients over the course of 6 weeks and compared the results to those given a placebo. They found that the patients given placebo scored poorly in the test results, leading the authors to determine that nabiximols were “well tolerated” and “no serious adverse events occurred” during the trials.

The researchers conclude, “In this proof-of-concept trial, nabiximols had a positive effect on spasticity symptoms in patients with motor neuron disease and had an acceptable safety and tolerability profile. These findings should be investigated further in larger clinical trials.”

In 2017, another promising study was published in the journal, Neural Regeneration Research. The review found that the only current treatment for ALS patients is a pharmaceutical drug called riluzole, which works by inhibiting neuron signaling. Rinuzole’s success is limited, and at best, it only increases the patient’s lifespan. This confirms that more effective treatment options are necessary for ALS patients. But considering that the endocannabinoid system is involved in ALS pathology, particularly the spinal cord which suffers motor neuron damage because of the microglia and macrophages which express more CB2 cannabinoid receptors.

“So all these data show how editing CB2-mediated processes could change ALS progression and how much the endocannabinoid system is potentially involved in reducing neuroinflammation, excitotoxicity and oxidative cell damage,” write the researchers.

“There is a valid rationale to propose the use of cannabinoid compounds in the pharmacological management of ALS patients. Cannabinoids indeed are able to delay ALS progression and prolong survival. However, most of the studies that investigated the neuroprotective potential of these compounds in ALS were performed in animal models, whereas the few clinical trials that investigated cannabinoids-based medicines were focused only on the alleviation of ALS-related symptoms, not on the control of disease progression.”

A 2010 study supports these findings; it revealed that THC is effective in delaying the progression of ALS in mice. It is one of the most important studies to date, and was published in the American Journal of Hospice and Palliative Care.

“Preclinical data indicate that cannabis has powerful antioxidative, anti-inflammatory, and neuroprotective effects. Cannabis also has properties applicable to symptoms management of ALS, including analgesia, muscle relaxation, bronchodilation, saliva reduction, appetite stimulation, and sleep induction. With respect to the treatment of ALS, from both a disease modifying and symptom management viewpoint, clinical trials with cannabis are the next logical step. Based on the currently available scientific data, it is reasonable to think that cannabis might significantly slow the progression of ALS, potentially extending the life expectancy and substantially reducing the overall burden of the disease,” write the researchers.

Finding the perfect strain to treat ALS requires some trial and error, due to the fact that it’s a complicated disease to treat with multiple symptoms. However, patients should keep in mind a few things when selecting a strain to medicate with. One is that indicas may be a better choice to experiment with due to its unique profile, combining therapeutic terpenes and THC. Sativas or sativa-dominant hybrids may not be the best route of action because some patients may find them too energizing, but if you are bogged down by fatigue, you can see what if it provides you with any relief.

The presence of CBD may be the most important deciding factor for patients with ALS. But for the best effects, try to look for products that utilize an equal, or near equal ratio of THC and CBD. This would maximize the healing power of the entourage effect.

HOW CANNABIS IS HELPING WITH ALS AND THE ICE BUCKET CHALLENGE, CLICK HERE.