The #1 International Hippie Travel Destination For 2017 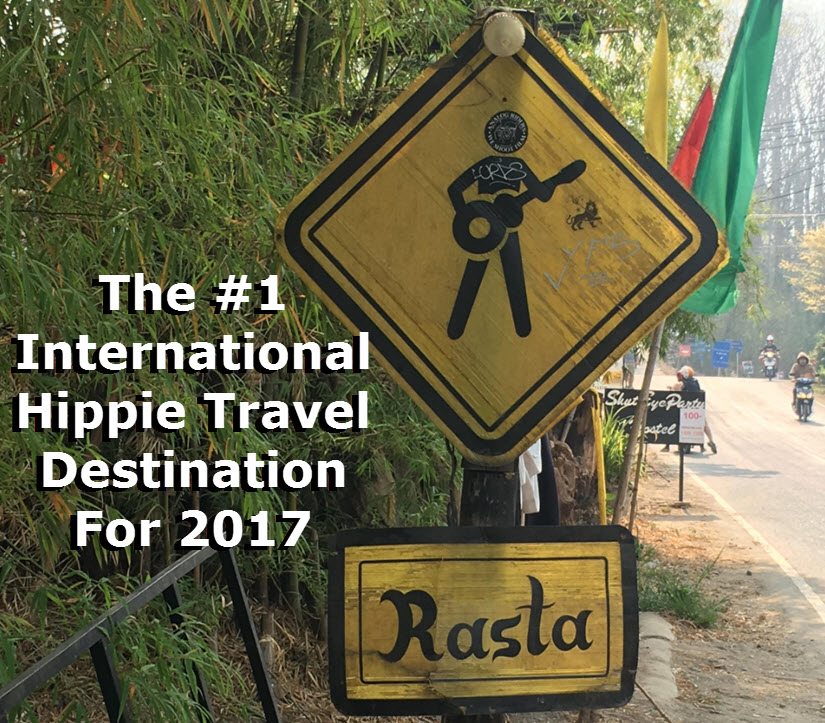 I just came from a trip to Pai in Northern Thailand, which is the ultimate destination for stoners, hippies, and psychonauts.  If you’re looking for a new cannabis-friendly holiday aside from the usual destinations, I highly recommend checking out Pai. 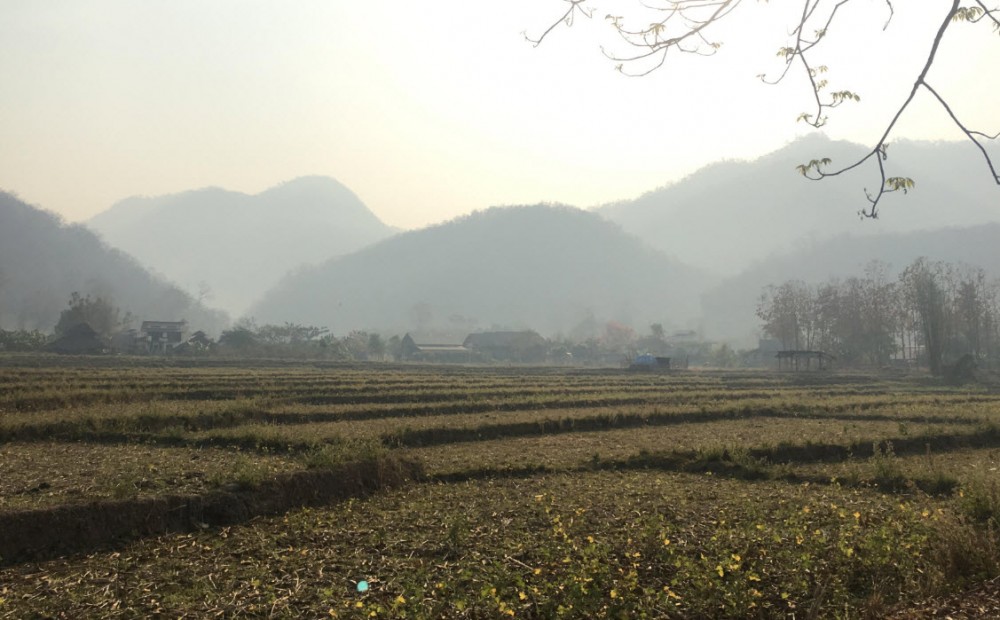 When my friends and I were mapping out our Thailand holiday, we weren’t sure where to go after Chiang Mai. I asked some travel advice from an expat friend living in Chiang Mai as well as two other friends who were just recently in Northern Thailand, and they all stressed that Pai was a must-visit destination.

After doing some Google searches on Pai, I was rather unimpressed with what I found. The research all pretty much said the same thing: relaxed, remote, laid-back, farmlands. We were on the fence about hitting up Pai, but my 2 friends and I decided to bite the bullet and go anyway, because it came highly recommended.

We booked a $ 4 van from Chiang Mai and endured the 3-hour ride, arriving just in time for sunset. I say endured because while 3 hours isn’t exactly long, Pai is known for the grueling 762 mountainside curves which means it isn’t exactly the best for those prone to motion sickness, like the toddler who threw up in my van halfway through the journey and made me throw up in my mouth from the disgusting smell. Or the grumpy Thai grandmother who kept elbowing me throughout the ride. 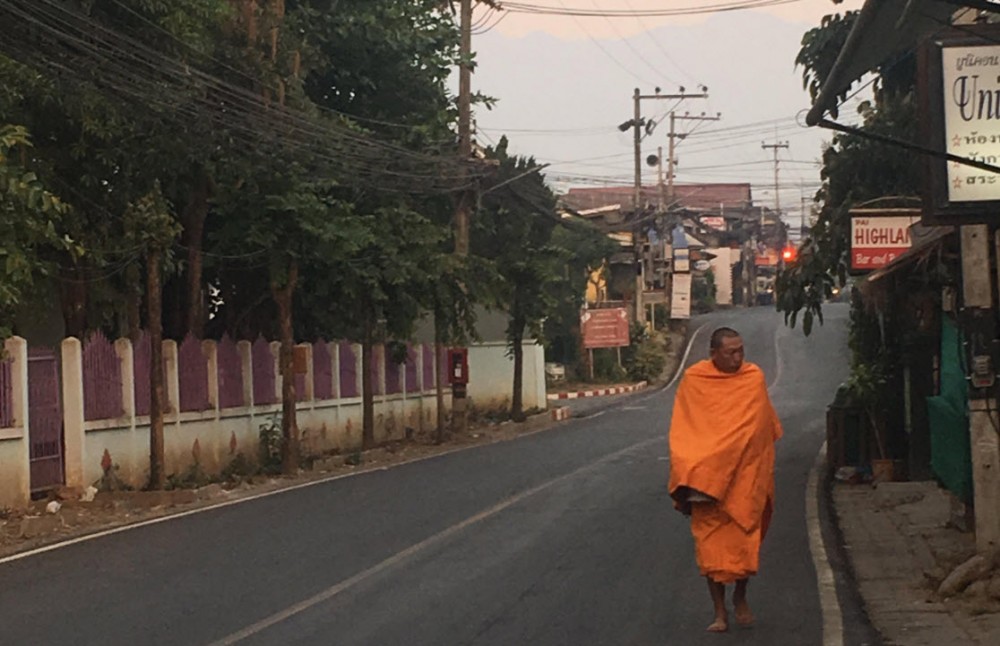 Anyway it was well worth it. We stepped out of the bus station and found ourselves in a busy main street surrounded by hippies from all over the world. There were street food vendors, tattoo parlors, cute little shops selling tie-dyed clothing and crystal jewelry… and then there were the three blond Caucasian tourists walking barefoot, obviously high on mushrooms, saying to each other, “Let’s walk toward the mountains” with glassy eyes staring into the distance. It was also refreshing to see that there wasn’t any traffic unlike Bangkok and Chiang Mai where we had just come from. In Pai, everyone gets around with motorbikes or bicycles.

My 2 companions and I looked at each other and smiled: we were all clearly pretty happy that we ended up in a place WAY cooler than we ever thought. We crossed to another street and waited for our farm side resort van to pick us up and take us to our accommodations.

During the ride, we couldn’t stop oooh’ing and aaaah’ing at the colorful streets we passed. Blacklight bars, insane graffiti, hippie restaurants. We couldn’t wait to go out and explore! After we settled in, we headed out to eat a late dinner at the Pai night market on the streets. 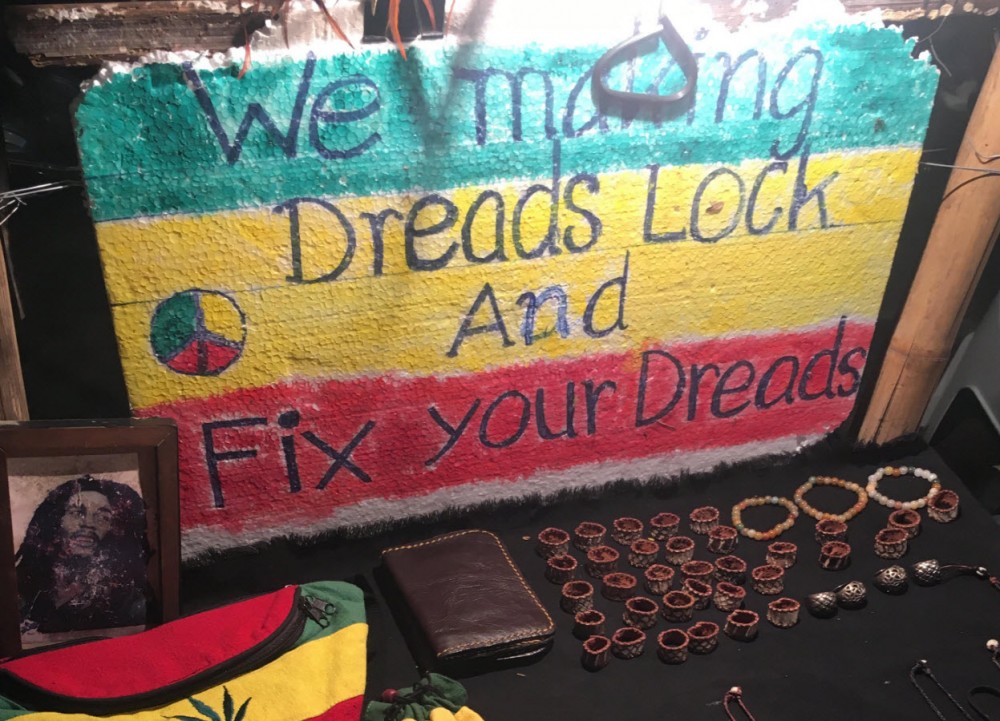 Just walking down a few streets of Pai will immediately tell you that you are definitely in a hippie’s paradise, no doubt about it. Pai is very different from other areas in Thailand; not even the odd, quirky street markets of Bangkok can hold a candle to the special, albeit spiritual, character of Pai. At night, vendors lay out mats selling all kinds of crystals, vegan chocolate balls (DELICIOUS – must try!), handmade natural balms and skincare products, dream catchers, more tie-dye clothing, elephant print pants (typical tourist uniform in Thailand), and dread lock repairs and services. Speaking of dread locks, easily half of the people we saw during our time there were all in dread locks, both tourists and locals, and of all races. Then we saw a sign on the road that said “Rasta.” A-HA!

Although I hadn’t planned to get high on this trip, I knew I couldn’t pass up the opportunity to try some drugs while in Pai.

Time To Get High 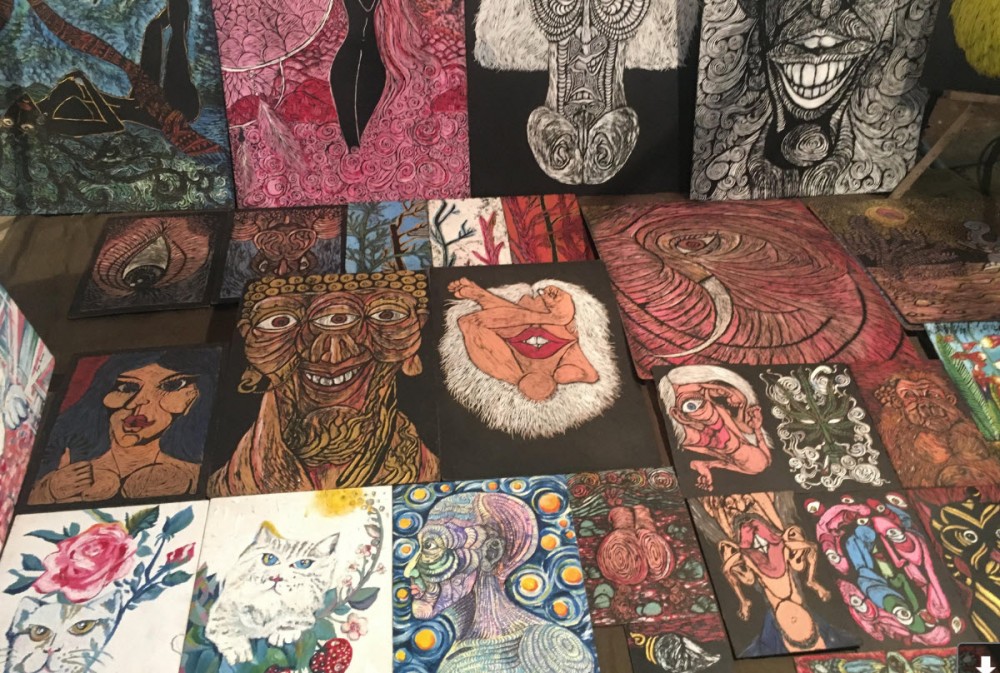 On our first full day, my companions weren’t up for getting high so I got on my bicycle and sped off to Sunset Bar, which is apparently THE place to go for a mushroom trip. They had a special wide lounge area filled with hammocks, throw pillows, and small tables all made out of bamboo… perfect for a mushroom trip.

It was around 7:30 pm and I approached the bar. It felt weird; clearly I wasn’t used to explicitly asking for drugs in a public place, moreso in Thailand of all places. I simply said, “Mushrooms.” And the waitress smiled at me and gave me a 12-ounce plastic cup with a straw, for $ 14. I peeked under the cover and found a blackish-green juice staring back at me.

I sipped, and it was tasty! Definitely not unlike the mushroom jams I’ve had in the Philippines which made you gag every few minutes until your body ingested all the chemicals in the plant and you’re off to outer and inner space. Pai’s mushroom juices had a sweet, candy-like taste which made it little too easy to get carried away and maybe have a little too much. Since I was alone I made sure to try and take just the right amount, so after I sipped 20% of the drink I decided to wait. 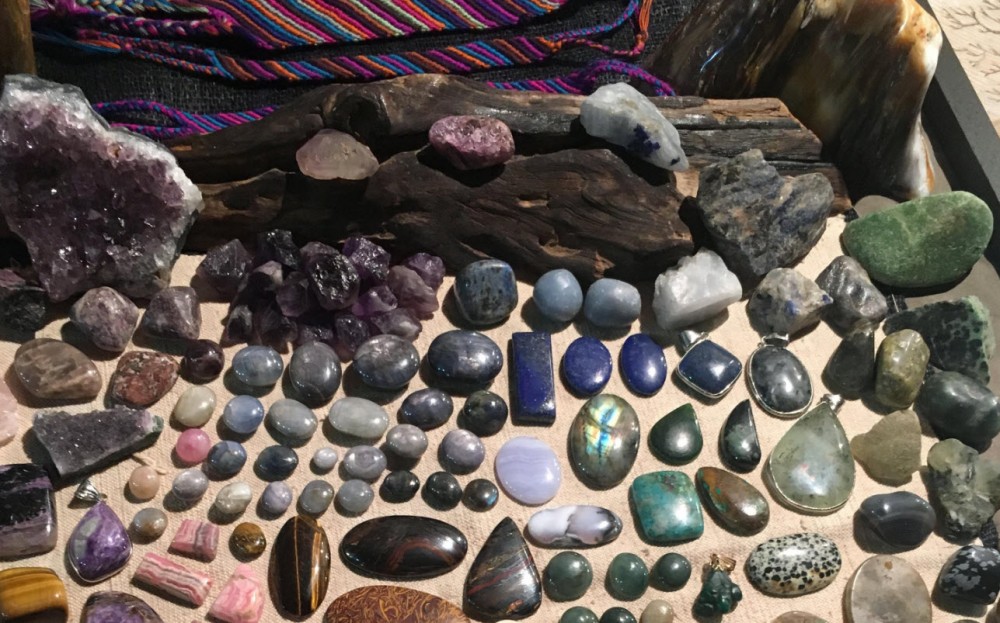 Sure enough after 30 minutes, my skin began feeling like gelatin and I started hallucinating mildly. I found a group of tourists who had just moved to the bonfire outside and asked if I could join them, and they were very welcoming and accommodating. 4 hours and crazy hallucinations passed, and it was just me and one more tourist left, an archaeologist from Germany who was a self-admitted psychonaut. My mushroom trip was very strong, definitely the strongest of all I’ve ever had in my life and it was more of a body high (I fell asleep twice) than a cerebral, hallucinating high (which is what I prefer with mushrooms).

Once the high was gone, my new friend brought out a joint and offered me some. I think it must have been a great indica-heavy strain because it gave me a relaxing body high, perfect for coming down after a mentally-tiring but fulfilling mushroom trip.

Tips For Getting High In Pai 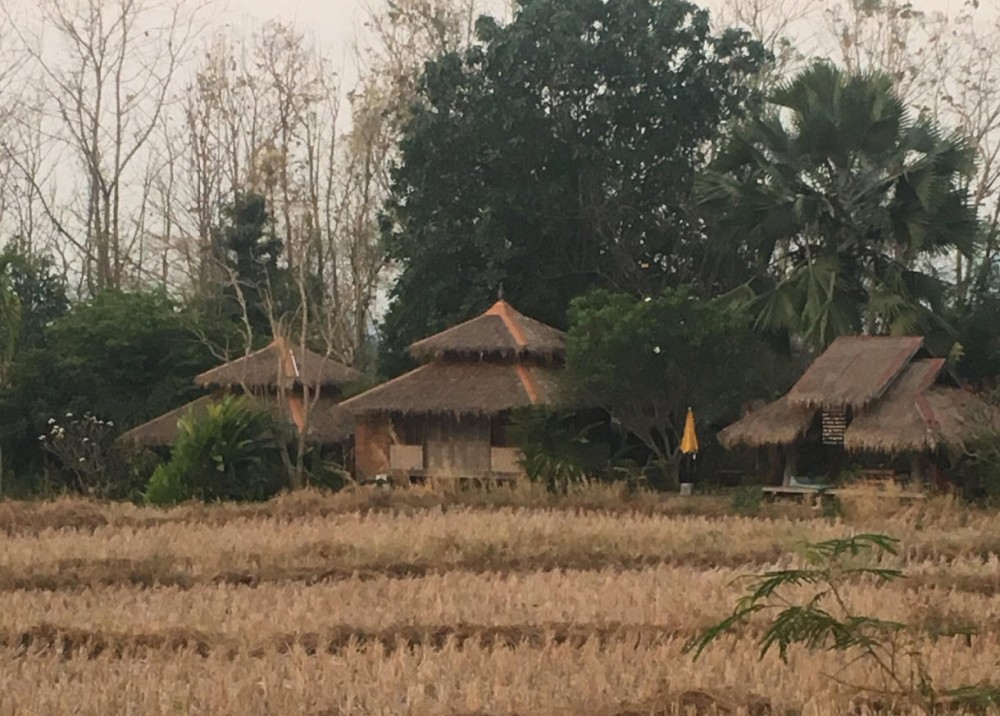 Pai has a dark, sordid history. It used to be an opium central ruled by a Burmese drug lord, and was only made safe enough for tourists during the 80’s. Several thousand people died in an open-season drug war where the government gave permission for the police to shoot anyone accused of using or selling drugs, even without evidence.

Because of this, it’s not uncommon to see signs around the city banning public marijuana and drug use, and the cops may be on to you. I assume that because Sunset Bar is such an established spot for drug use that the owners may be paying the cops off, but in other countries (ESPECIALLY Thailand) it’s always best to try to be as discreet as possible. 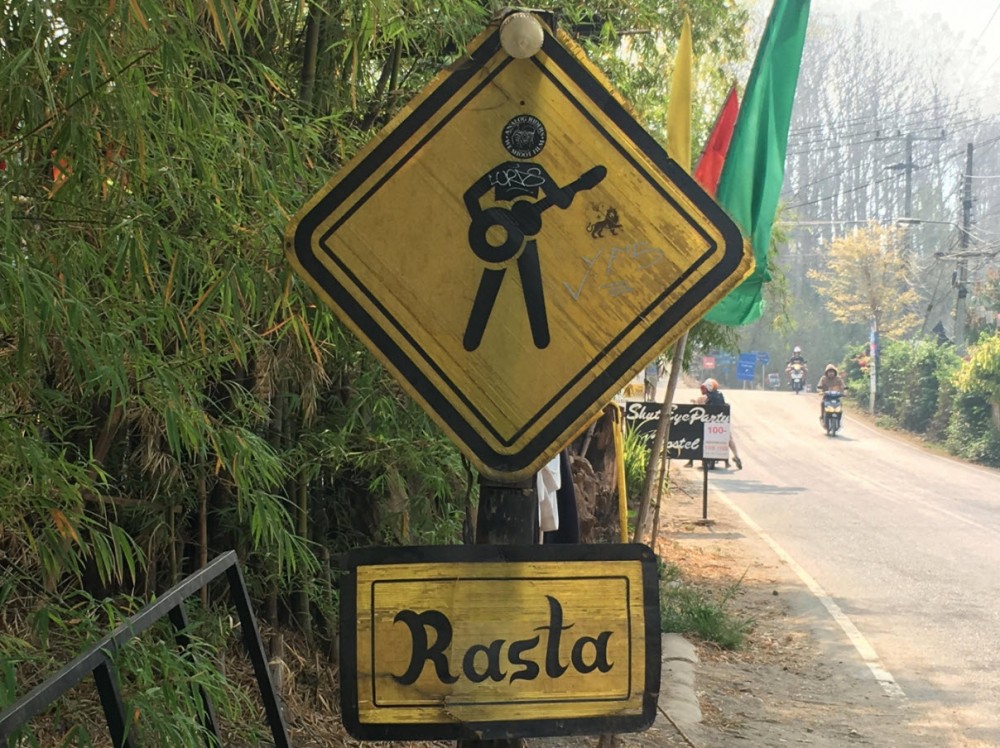 If you make it out to Pai (and I hope you do) for a cannabis and drug friendly holiday, here are some tips:

So that’s the story of my literal trip to Pai, Thailand! Four days was definitely too short and I’m already looking forward to coming back.

Have you ever been to Pai? Do you plan to visit? Share your experience with us in the comments below! 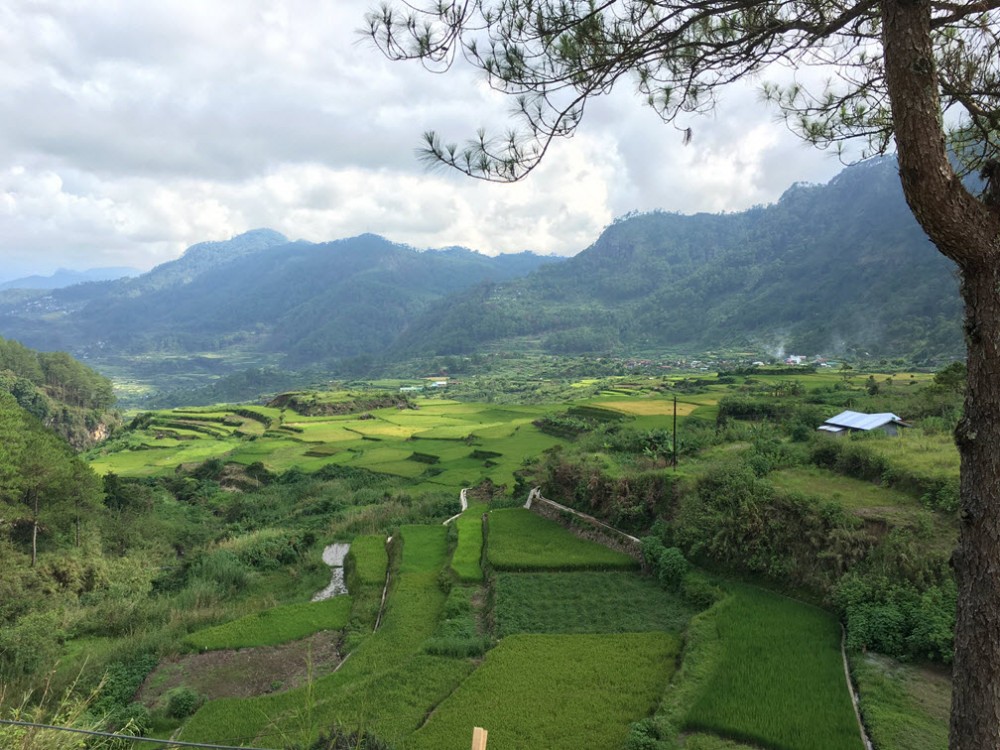 EPIC HIGH IN THE MOUNTAINS OF SAGADA, CLICK HERE.