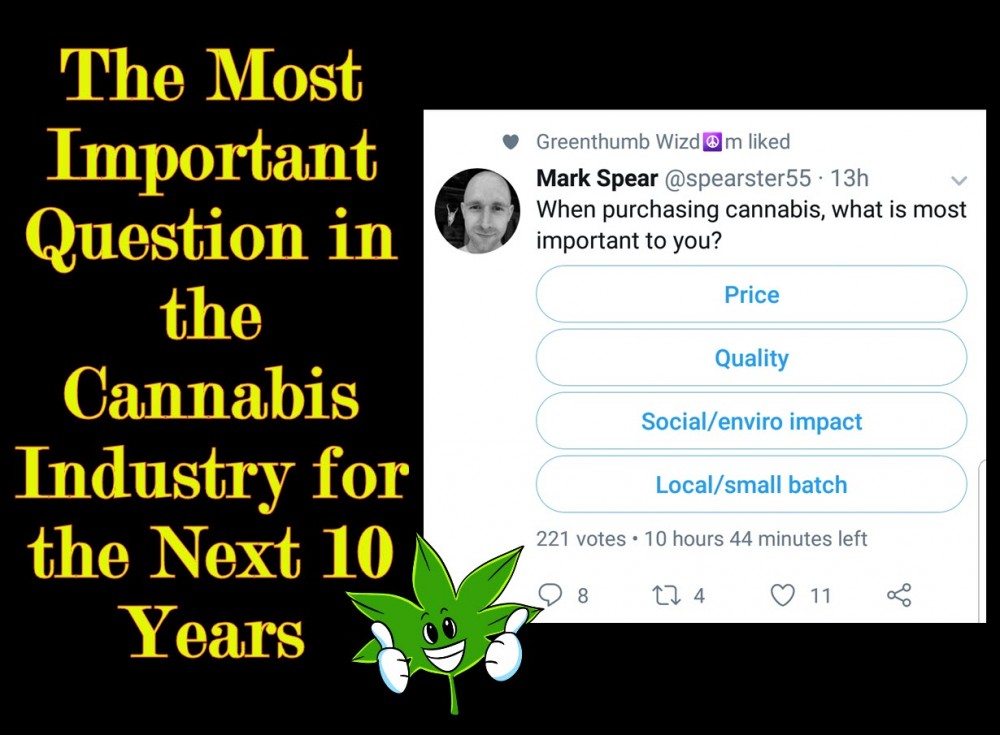 The retail space will be shaped by how you, and millions like you, answer this question.

There are a lot of questions in the cannabis space, especially around legality, taxation, investment, and Federal government offices.  One of the most important questions that will define the cannabis space for the next 10 years was in a tweet by Mark Spear, and it caught our eye.

The decision-making process behind how you pick your cannabis is going to have massive implications going forward for the worldwide market.  For those who are new to the cannabis niche, while cannabis has been illegal, most of the cannabis grown worldwide has been done by small scale growers or large grows in other countries run by illegal drug cartels.  With Canada leading the way toward full medical and recreational cannabis, the Canadian stock market has welcomed cannabis companies with open arms, and money has poured in from around the world into these cannabis companies.  The largest marijuana ETF just passed over $ 1 billion in holdings and the number increases each week.

Depends on who you are asking.  There is a real fear that cannabis will mimic other consumer-based industries like alcohol and junk food.  The worry is that the small cannabis grower or farmers will get squeezed out by massive farm grows.   Millions of meters of indoor grow space have already been approved in Canada to meet Canadian demand as well as export expectations.  As with small farms in America, does the small cannabis grower stand a chance against a “factory farm”?

Scaling is key to growing large amounts of cannabis, and because the public companies have funding and a stock market to draw capital from, they have access to all the cash they need for expansion. The small grower does not, so he or she has to pivot, creating a brand around such things as sun grown, organic, or craft cannabis.

Although the cannabis industry HATES being compared to alcohol, in the case of the retail expansion after alcohol prohibition ended in 1933, there will be business market similarities. Bud Light, Coors Light, and Budweiser are the 3 top selling beers in America, all made by massive alcohol companies.  To give you an example, Bud Light sales hit $ 5.8 billion in 2017 in the USA alone.  Those 3 brands make up over half the beer sales in America.

Does craft beer exist?  They sure do and a small loyal following of millennials are really into the craft beer scene, but guess what?  Not one craft beer comes close to cracking the top 20 list of for beer sales. Usually, when a craft beer seller hits a certain market cap, it is bought by one of the big 4 brands and they use their delivery, packaging, and transportation systems to keep building the brand on a national level.  Budweiser has bought craft brewers once they hit a certain size and well as Molson Coors.

So, what does it all mean for the cannabis industry?

There will be massive marijuana grow facilities (there are already) in Canada and the US this year. The US is restricted to legal cannabis states for now as a Schedule 1 drug listing, which cannabis is, cannot cross a state line, it is a Federal offense. Once the Federal law changes in the USA, even more money will flow into US based cannabis companies and the grow facilities will get even bigger.

So, what is the craft or small grower to do?

You must differentiate your product.  Organic, sun grown, vacuum sealed, will all be common marketing and grow options for the smaller grower. Marketing will be key, consumers will want something that reflects their cannabis tastes in the same way Apple, Land Rover, Gucci, Kate Spade, and Lulu Lemon reflect a lifestyle of their consumers.

Yes, there will be massive, massive grow facilities producing large amounts of cannabis that will be high quality and indoor grown.  In the end, it will come down to Mark’s tweet, why are you buying cannabis and what is important to you?

The people buying a case of Bud or Bud Light every weekend are not really worried about if their beer won any awards or has organic hops, they want the desired effect of drinking 5 or 6 Bud Lights.  It is a cheap beer that “gets the job done”. (and in the case of light beers, with less calories)

So, what is the job of cannabis to get done?

This is where the article could go off the rails.  Yes, there will be a large majority of people buying recreational cannabis who just want the cannabis “to get the job done”.  They want to get high and have a good time.  Remember, Bud, Bud Light, and Coors like make up over half the beers sales in America, and it’s not because of the sophisticated taste, but it “gets the job done at a price their customers feel is fair”.

Recreational cannabis will follow the same path.  Assuming there are no poisons or bad stuff in it, which testing will take care of over time, people want cannabis to get the job done at the lowest, or best price possible, hence, mass growing and massive marketing.  In the end, on a Friday night if you want to get high smoking a joint, do you care on the recreational side if it from Canna Flow, High Flow, Green Goddess, Dutchwood, or anyone else?  No, what did it cost, and did I get high, just like beer.

The medical side is a whole different beast, one that alcohol does not have a history with and we cannot look to that industry as a blue print.  The science behind medical will massive once the US removes cannabis from the controlled substance list and allows full medical testing.  Different strains, terps, trichomes, and hybrids will have different medical value.  Will Big Pharma come in and dominate the medical side with special grows and lab combinations, and leave the recreational side to the alcohol companies who are already buying large stakes in Canadian cannabis companies?

Much like seeing a sign that says, “Buy Local”, there will be similar message in the cannabis space to help support the local grower or family operation.  Some will survive, some won’t, and if they get a big enough market cap, you can bet a bigger company will come along and want to buy them, just like the craft beer game.

So, why do you buy your cannabis and what is important to you? 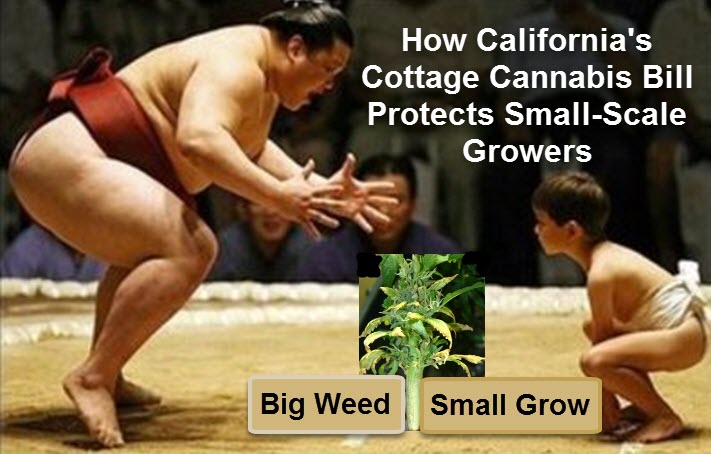 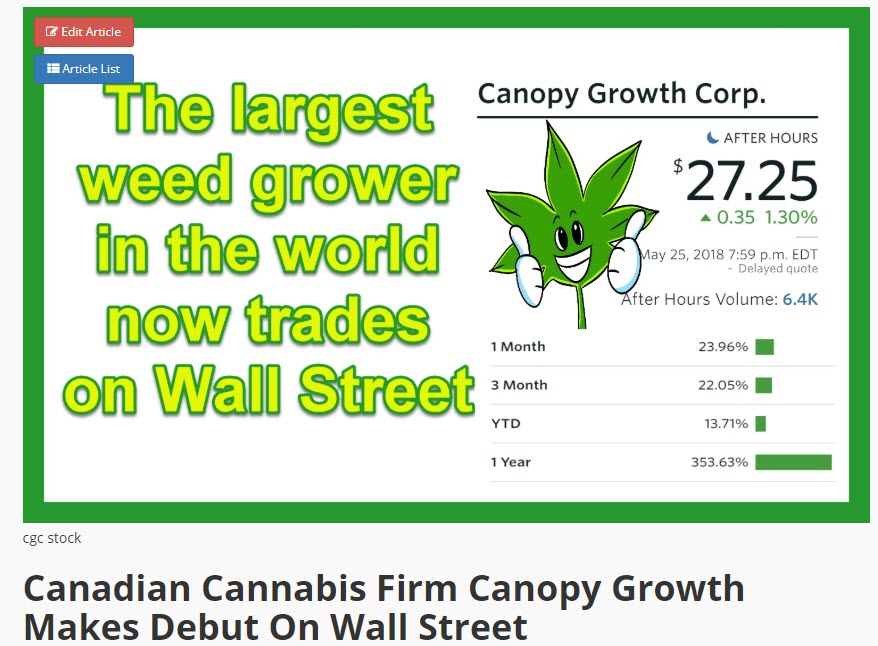