Top 10 Things To Do While Stoned (Quarantine Edition) 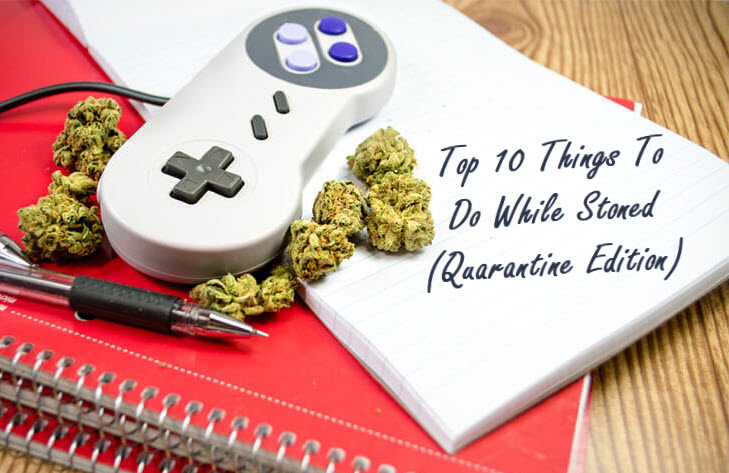 2020 has been one FUCKED UP year so far! We’re definitely in some sort of cosmic time-warpy thingamajig that hopefully will stabilize itself over the next few months. One can dream! I mean Jesus – WTF is going to happen in November? December? Is Santa Dead?

Forget about that for a second – let’s bring you back to here and now. Yes, you –sitting there reading this article, I know you’ve been going through some shit. You’re probably as bored as Amish sex or so stressed and anxious you’re looking for ANYTHING to get your mind off things for a while.

If that’s you – then you’ve come to the right place. The following 10 activities can be done right in the comfort of your own home due to the quarantine restrictions some people have imposed on themselves.

To be honest – you could totally go for a walk in my opinion – but hey, if you’re cool hunkering down and riding this one out in the safety of isolation – let’s see how we can fill up the time.

For most of these activities you simply need weed and time, for others – you may need to buy stuff. Okay – here we go.

In no particular order…

1 – Get Stoned and Meditate for a while….

This is probably what you aren’t looking for but hear me out. When you learn how to enter into trance-like states – meditation becomes an activity that not only helps you feel more relaxed and centered, but has physiological benefits as well.

It helps with focus, boosts self-esteem and awareness, helps with depression, and much more. You can read about the wonderful benefits of meditation here.

Doing this while you’re blitzed is also very fun. And there are many different ways to meditate as well. You can do guided meditation, transcendental meditation, mindfulness meditation, candle meditation…there’s a flavor for everyone.

2 – Do some Breathwork sucka!

If you’re not doing Breathwork – you totally should. Breathwork is this revolutionary thing of…well…breathing…okay I know how it sounds but give me a minute.

Breathwork takes a typically ‘automatic system’ and puts it on manual. There’s different ways of breathing which induce physiological responses.

For example – you can purge your CO2 by taking shorter inhalations and longer exhalations. Or you can increase your O2 by doing the opposite.

What this does internally is fascinating and becomes even more so when you start incorporating breath-holds. Breathwork has been increasing in popularity over the past few years and will become more important in the years to come as your respiratory system is probably one of your most vital systems in the body.

The sheer depth of Breathwork is worth your while. You can try something like Wim Hof or something more calmer like Hermetic Breathing.

Breathwork also incorporates very well with the following thing on our list.

Yoga has been increasing in popularity over the years to the point where there are things like “goat Yoga”.

But this is not what I’m talking about. Forget the fads and just focus on the body. Yoga is a very unique form of exercise that will strengthen your body, calm your mind and allow you to release many of your frustrations and blockages.

Even if you go to the gym, doing Yoga should be a part of your daily routine – even if it’s only for 15 minutes a day.

Yoga is learning to respect your body and honoring it. But it’s also a story of life and death. You start as a child and end as a corpse.

Even if you don’t wish to delve into the deeper meaning of Yoga – stretching feels good. Yoga is stretching perfected over the course of thousands of years.

If you don’t want to “do” anything…how about the next thing on the list.

4 – Listen to some music you’ve never heard before…

This is an activity that will bare fruits over time. It’s an exercise in expanding your music library. To do this you need to find bands that are “similar to the ones you like”.

So let’s say you’re balls-deep into Puscifer – you’ll look for bands that sound similar to them. You can do this by simply searching “Bands that sound like” and put whatever you’re favorite artist is in Google and a gazillion results will pop up.

If you have Spotify or Apple Music, or whatever other service you have – they have playlists, sound like suggestions, and much more.

I recommend making a list of about 30-songs you’ve never head before. Set the mood, get your bong or blunt – and as you light it up – press pay.

If you absolutely hate a song, skip it – but you’re only allowed 3 skips. That way you judge it differently. You may find some awesome music this way.

If not you could always do what’s next on the list.

One of the best activities – which could be mixed with #4 very easily – cooking! If you’re shit in the kitchen – all the more reason to try make some new recipes while you’re stoned.

If you are successful – you’ll have a delicious meal and would have learned something new. If you make a huge mess – it’s your personal “Nailed it” episode for your own amusement. But really – start small and work your way up. There’s plenty of things you can learn in the kitchen that tastes absolutely awesome.

If cooking isn’t your thing – perhaps…

6 – Watch a shitty movie on purpose…

Ah – you thought I was going to say “Netfilx and Chill” but no…my lists are far more nuanced than that watered-down-tripe.

If you haven’t experienced the bliss of watching shitty movies on purpose – and by shitty I mean a total cinematic flop – you haven’t watched movies.

If you’re not sure about what I’m talking about, then you’re in for a treat.

Sharknado [All of them]

These should keep you busy for a while.

If you’re not looking to watch a shitty movie – you could Netflix & Chill or…you could….

There’s so much interesting shit littered throughout the ages that if you’re simply open to look – you may be surprised at what you’ll find.

I’m not saying sell your soul to the devil. As if – the devil stopped trading in souls centuries ago. Besides – when you go down the path you’ll quickly learn that the devil is merely an interpretation of an idea that has been whispered to us over the centuries.

We all come from pagan roots, no matter how religious you think you are – everything is based in a common myth at some point. Over the millennia it evolved into diverse narratives that some deemed to call “occult” – but the truth remains that we were all savages at one point.

And what those savages wrote down were surprisingly enlightened. From checking out old grimoires, to Wicca traditions. Lately there has been a surge in interest of Chaos Magick – which is a system that validates all belief systems as interpretations or lenses on how people interact with reality.

It’s really insane stuff. I’d recommend something like Condensed Chaos by Phil Hine or even something older like Prometheus Rising by Robert Anton Wilson. You could also check out modern mages like Damien Echols. He was the Fishbowl Man in The Midnight Gospel on Netflix

If playing with devils and angels is not your beat – don’t worry maybe you can….

Maybe you can roll a decent joint or blunt – but have you tried to make an Octopus Joint or a Revolver Joint? How about a Tulip.

If you’ve got the weed, push yourself to the next level and roll some crazy joints. I’d recommend starting with a Cross Joint and working your way up. I have a list of some insane joints you can read here.

If you don’t have the weed to do this…may I interest you in the following?

This should get you started down the rabbit hole.

If this isn’t up to your speed then there’s always….

10 – Stop being a little bitch and entertain yourself…

If by now there isn’t something on this list that appeals to you – and I have painted with a broad brush – you probably need to get laid. If you don’t have anyone to help you with that – then by all means, do it yourself.

And that’s the Top 10 things to do while stoned during the quarantine.

MORE THINGS TO DO STONED, READ THESE…

CAN YOU GET A TATTOO WHILE STONED, SHOULD YOU?

CAN YOU GET PERSONAL WHILE STONED, SOME THINGS TO CONSIDER!