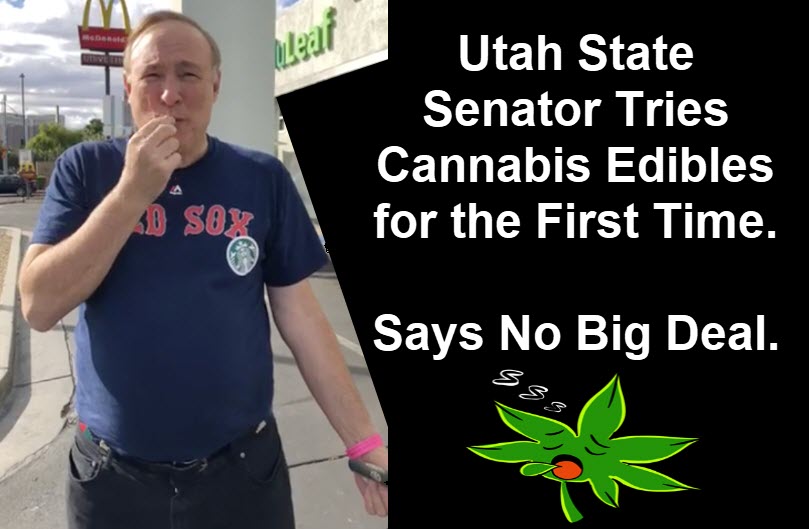 The other day I was wonderfully surprised to see Senator Jim Dabakis eat a gummy bear in Las Vegas to try marijuana for the first time. Granted, I know absolutely nothing about his other policies and in no way endorse him as a politician…but his willingness to try something before making an absolute decision on a sensitive topic such as marijuana legalization gave him definite points in my book.

I not only think more Politicians should do what Dabakis did, but I think more of us people should do the same. There was one sentence I particularly enjoyed when watching his video; “…It seems that most of the people who vote against marijuana…have never tried it…” [paraphrased]

It’s true, how many people straight up deny something before fully understanding that said “something”?

If there is one thing that cannabis has taught me, is that we as humans jump to conclusions more often than we’d like to admit. We have a set way of seeing the world and whenever someone or something challenges the status quo, we immediately go into defensive mode.

Our stability lies on the certainty of our reality. If what we think we know suddenly comes under fire from another source, it means that the entire stability of our certainty is in jeopardy. In this case, you have two options.

First, you could put up your walls and deny the challenge to the status quo, or Second, you could embrace the new information and experiment.

While romantically we see ourselves as these “open minded individuals, malleable to change”, the fact of the matter is that we all believe our own bullshit. We’re convinced that what we know…we know. And if anyone tries to convince us that what we know is wrong, our egos take a hit and we go on the offensive.

Jim Dabakis is the type of behavior we should all model. Someone, who have never touched a psychoactive substance, other than ethanol I assume, would be willing to experiment with his consciousness in order to find the truth or at the very minimal gain perspective on the issue.

Utah is a very conservative state compared to the rest of the United States. For a sitting Senator to use their own money and publicly show experiment to the world only tells me that cannabis legalization is imminent, and that there still are a shred of hope for humanity left.

I for one, since starting to smoke cannabis in my early teens have been using it as a tool to break down my own paradigms that I have built over the years. As mentioned earlier, we all believe our own bullshit.

Cannabis provides a moment of disconnect from that bullshit to allow you to reanalyze your own life. To ‘Do a Dabakis’ is just that…giving yourself a beat to think for yourself and not fall into an automated response you built up in your brain.

If more people ‘Did a Dabakis’ I’m sure we’d have less conflict on all planes. People wouldn’t get so offended all the time. The importance of their own opinion would diminish. Pride would take a seat right next to humility.

These days, partly thanks to the Internet…people think that their opinions actually matter. Facebook, Twitter and Social Media gave voice to everyone equally and in turn, sparked a narcissistic crusade of ignorance spreading like an STD at a college kegger throughout the world.

And you know what they say about opinions…they’re like assholes…it’s natural that you have one…just don’t go around showing it to everyone you meet. But I digress…

Every day that I wake up and learn a thousand new things, I try not to let it go to my head. Rather, the affluence and availability of all knowledge reminds me that I truly know very little about everything. What I think I know is always subject to changed based on new information coming down the line.

Thus, only through experimentation, logic and reasoning can I have somewhat of an understanding about what my life is in relation to others. It has taken me years to put this into practice, but here I am…still trucking.

Jim Dabakis [at least in the act of eating a gummy], is one of my heroes. He took a step into the unknown to understand the other side. To perceive the dangers first hand [if any]. We need more Dabakis’ in this world, willing to put their own rhetoric on the line to seek truth.

I for one will be doing my own personal challenge this week…I will “Do a Dabakis Challenge” where I’ll go and try something that I am absolutely not familiar with and experiment with how I feel about it. It’s an exercise in consciousness.

If any one of you guys are up for the challenge, just hashtag #DoADabakis and we’d love to see what you come up with.