Home Marijuana News What are the Dangers of Smoking PGR Marijuana? (Wait, What is PGR Weed, Again?)

What are the Dangers of Smoking PGR Marijuana? (Wait, What is PGR Weed, Again?)

Plant Growth Regulators seem nonthreatening, but this cannabis should instill fear in you as a user. Of course, you have heard about the negative impact of fungicides and pesticides on your bud, but that is not the only risk of contamination you will experience. There is another chemical scare brewing in the cannabis industry, and you’ve got to know how to identify it.

In the 1930s, American agricultural enthusiasts were faced with a chemical revolution. At this time, the farm industry in America had accepted the use of synthetic chemicals, which includes things like:

This was also a time when new chemical applications referred to as “Plant Hormones” and regulators were applied to pineapples to boost their flower production. Farmers in this American agricultural era started to adopt these methods with other crops, hence gaining popularity.

The plant growth regulators used on crops were aimed at controlling their growth in a particular way. For example, with cannabis, it meat that cannabis growers will have denser buds, larger yields, and bushier crops, which were a sign of abundant growth.

Aside from cannabis, the plant growth regulator can be sprayed on trees to keep them short and preserve them; there are also other ways of application on crops. PGRs are chemicals utilized to change the rate at which a plant grows or alters a part of the plant.

The plants naturally produce hormones that aid with their growth, fruits, and other developmental phases. Now cultivators continued to use PGRs from the 19th to the 20th century, with some of the chemicals regulated and others banned.

The rising rate of PGRs in the cannabis sector is still uncovered because more significant parts of the marijuana industry still function in the illegal (black) market. Therefore there is no way to tell when PGR is sprayed on cannabis and when growers can utilize them.

Most worrisome is the fact that frequently cannabis cultivation chemicals do not include a list of ingredients. More so, you can buy PGRs online or at hydroponic shops. If you take the time to read the label, you will know if there is PGR in the product or not.

Another crucial rule to remember is this: if the nutrients offer the assurance of great returns with no ingredients listing, then it may have PGR. Here are three types of PGRs:

This can be applied on different plants from trees to turfgrass and even cannabis. It is mainly used to manipulate the plants into growing uniformly with thick vegetative sizes.

Unfortunately, Paclobutrazol doesn’t allow the plants to produce their natural terpenes despite the buds looking like regular cannabis plants. The final product will be less effective and not very tasty. This chemical has a damaging toxic effect: it affects brain activity and can impact the reproductive cycle.

Chlormequat chloride was initially solely used for flowers, but it is now used for weed. When used on plants such as cannabis and other cereal grains, it impacts its vegetative growth.

But accidental human exposure through inhalation or immersion through the skin can cause throat and nose irritation. It is still being used in major agricultural sectors like the cannabis market, posing a threat to safe cannabis consumption.

Initially, this chemical was crafted for ornamental plants, but when applied to cannabis, it inhibits growth. In 1989, it was banned by the EPA with the strict instruction that it shouldn’t be used for food. It was also forbidden because it contributed to cancer growth, with the EPA warning that consumption can lead to public health risks.

How to identify a PGR weed

Other damaging pesticides used on cannabis do not display worrisome signs, but PGR weeds show clear signs. PGR cannabis doesn’t look like a natural organic weed, and they are known for having orange hairs all over the buds.

You will also see tiny trichomes developing on the buds (they will be like crystals with o clear yellow and purple colors. The plant’s flowers will also feel spongey; they will have smaller buds and wouldn’t even smell like weeds.

If you see these signs on the cannabis plant or a bud you buy, PGR has been used. The more PGR is used on the plant, the more signs will be on the plant. Inspect all new cannabis batches you get, and if you are still unsure after the inspection, insist on speaking with the supplier.

There are many health-related concerns with PGRs in consumables. With these substances still in use in the agricultural sector, it is a cause of the problem for cannabis enthusiasts. Even when these PGRs are banned in food crops, it is still used on cannabis, exposing the consumer to all kinds of health risks. Immediate exposure can lead to respiratory disease, vomiting and nausea.

Some cannabis growers enjoy using PGR because of its capacity to transform the plant to produce larger yields. But this is a way of cheating nature ad making inferior cannabis products.

Even if you end with aesthetically pleasing and large buds, the plants will be more minor cannabinoids, and they wouldn’t be rich in terpene. Yes, you will have a bountiful harvest but inferior quality, which is dangerous to users.

So the fears for PGRs are legitimate as smokers and cultivators are calling for a total ban. Until the ban happens, look out for dull-orange buds with a flexible center. You don’t want to face a health risk because of PGR in your cannabis. 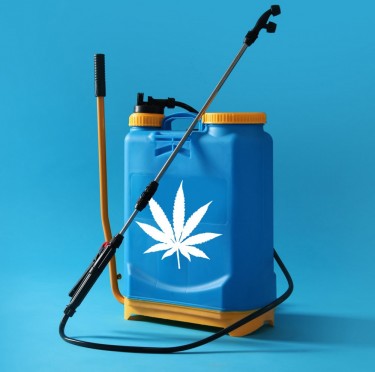 PESTICIDES IN CANNABIS, WHAT YOU NEED TO KNOW TODAY!