Why is Biotech Institute, LLC Trying to Patent Every Cannabis Strain Known to Man?

Why is Biotech Institute, LLC. Trying to Patent Every Cannabis Strain in Dispensaries? 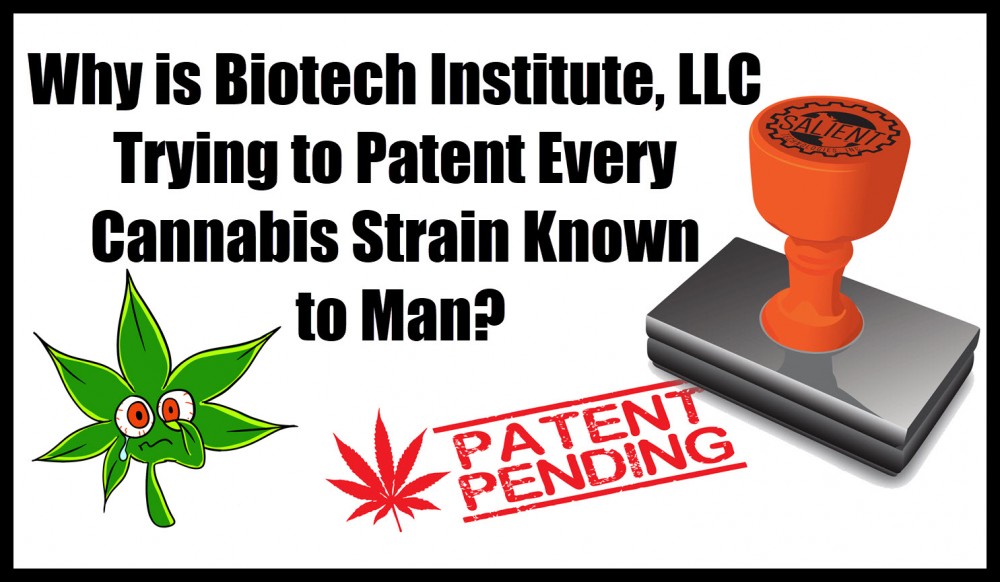 Utility patents, Biotech Institute LLC and undercover maneuvers to quietly take over the Cannabis Industry, oh my! Word on the street is that there are hostile things looming on the horizon for the future of cannabis. Conspiracy theory? …shhhhh…Don’t say it too loud. Maybe don’t even hint that you may, hypothetically of course, be thinking about it by foraying into an article that is going to present to you just that: a conspiracy theory that threatens to destroy the freedom we’ve all been fighting for in this War on “Drugs.” Am I just a fear-mongering merchant fishing with click-bait?

Maybe. Maybe you should take a look at some of this evidence, maybe even do a little bit of your own research, make up your own mind at the end of it all.

Utility patents, in particular those falling under the category titled “Breeding, Production, Processing, and Use of Specialty Cannabis” are a categorization collectively referred to as “The Biotech Cannabis Patents,” a thing that has many in the cannabis industry concerned.

It’s a thing you need to be worried about too. Utility patents for cannabis hold the potential to put herb in a 20-year headlock and Biotech Institute LLC has been buying up patents to some of your favorite strains for years. The owner of a utility patent wields the power to control sales and distribution as well as advertising. In short, what this means is that you could be sued, or worse, for growing your favorite strain without first accessing the proper avenues.

Wait a sec, I’m getting ahead of myself. I digress.

Firstly, who the hell is Biotech Institute LLC.?

Well, that’s the crazy part- no one really knows. Almost two years ago it was reporter Amanda Chicago Lewis who broke the story, and after receiving several tips from the upper echelon of several marijuana magnates she followed the bread crumbs. What she found was a corporation, that aside from moving in to monopolize the industry by way of patent control, was virtually non-existent. There are no BioTech Institute dispensaries, they manufacture no products, oversee no streamlined website with mission statements and information about the vision towards which they strive.

What we do know about BioTech Institute is that they are the pioneers of utility patenting within the cannabis industry. On March 14th 2014 they filed the ‘554 patent years before any of us aficionados and growers even knew there was such a thing was eligible for the protection of cannabis strains. In the 228-year history of the United States Patent and Trademark Office this was the first time it had ever approved a patent for cannabis. (Keep in mind that while cannabis has been a schedule-1 narcotic according to the United States Federal Government since the 70’s, it was listed in the US Pharmacopia from 1851-1942.) This was no small victory achieved by the covert big bud business.

Currently, Biotech Institute LLC owns 3 patents, with several more on the books going through the rigor of government procedure. Seems pretty non-threatening right? Shit, the last dispensary I went to flaunted at least 30 different strains. With varieties sporting titles like Alaskan Thunderfuck, White Girl OG and Sweet Jesus, it may be hard to imagine how laying claim to a patent for a paltry trio of greenery patents is even going to cause a ripple in the ocean that is the current marijuana movement, but I’ve said it before and I’ll say it again: the devil’s in the details.

According to PatentDocs.org, some of those details are as such:

However, despite these limitations, commentators have speculated that Biotech Institute’s patents may cover anywhere from 50-70% of all Cannabis plants that are currently on the market, which could pose a serious threat to many Cannabis growers. Unlike plant patents, which are narrow and cover a particular, well-defined new plant variety, utility patents directed to plants have the potential to claim a much broader range of varieties.

Further, the potential sweeping scope of these patents, specifically, highlights a couple of issues with prosecuting and challenging patents on Cannabis plants, generally.  For example, there would seem to be a lack of prior art available showing the particular chemo-types of strains that are currently in use.  Without this information, Examiners are unable to accurately determine whether a Cannabis plant with a particular chemo-type is novel and non-obvious.  Moreover, the lack of publications or information on the Cannabis varieties currently available to the public may pose similar challenges for third parties seeking to initiate certain post-grant review proceedings before the USPTO of patents covering Cannabis plants.”

If all this is true then what happens to all of the intellectual property surrounding a marijuana strain that turns out to be the exact same thing as another strain, or 20 other strains?

What does all this mumbo-jumbo mean?

Some fear that Biotech’s hush-hush movements point to the end of artisanal cannabis and usher in a paradigm that many advocates claim are the first signs of the push for corporational control.

Pot geneticist, Reggie Gaudino estimates that the company’s desired patents would be worth hundreds of millions of dollars and could eventually affect every marijuana strain currently being bred.

Let that sink in for a second.

If Biotech Institute continues down this path, 10 years from now, the vaults of patent banks secured by this greedy corporation may prevent people from growing specific strains. It may ask so much of them in licensing fees that small farms simply cannot survive.

While many people are hoping that federal legalization will lead to clinical trials, proving the benefits of cannabis to be more than anecdotal  “pain medication,” one company cornering the market like this could actually prevent medical research. Patents could affect our abilities to unlock the great medical and therapeutic prospects of cannabis. Whether or not this will actually happen remains to be seen, but one thing is for sure, Biotech Institute LLC. appears to be following the footsteps of big agriculture companies like Monsanto and Pioneer, and this writer is of the humble opinion that Mother Nature is the only one who can own the patent for a plant.

WHAT IS A GANJA PATENT? READ THESE…